Among returning Wildcats, Regie Meant led all defensive tackles with 31 stops last season…  Mike Hartline threw 31 passes in the 2008 Liberty Bowl, completing 19 for 204 yards. Playing with intestinal flu, Hartline was named the offensive MVP for the game…  Oklahoma had won 31 straight games before facing Bear Bryant’s UK team in the 1951 Sugar Bowl. The Wildcats upset the Sooners, 13-7…   After going winless in 1982, Kentucky scored 31 points in its season-opening win over Central Michigan in 1983, en route to a 6-5 regular season. At the time, it was the greatest season-to-season turnaround in Division I football history…

Jerry Claiborne’s UK teams won 32 games in CWS, still the record for a UK coach…   Rodger Birdthrew a 32-yard halfback pass to QB Rick Kestner for a score against Ole Miss, giving UK a 13-7 lead in the Wildcats’ 27-21 upset of the top-ranked Rebels in 1964 in Jackson…  Patrick Towles’s first collegiate TD pass came in 2012 against Mississippi State, when he connected from 32 yards out with WR LaRod King…  DB J.D. Harmon returned four kicks last season for an average of 32 yards (longest – 60 vs Louisiana-Lafayette in the season-opener)… 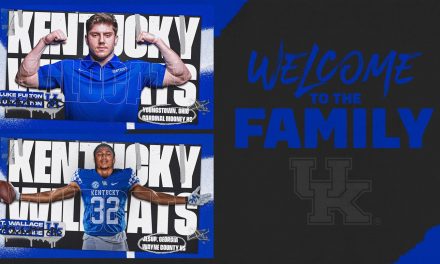