Sophomore had career game vs. NMSU with five catches for 133 yards and 3 TDs 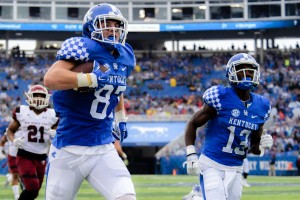 Conrad on the run (photo by Brandon Turner)

LEXINGTON, Ky. – University of Kentucky sophomore tight end C.J. Conrad has been named the John Mackey Tight End of the Week after a career game last Saturday against New Mexico State, it was announced by the John Mackey Award Committee on Wednesday.

Conrad caught five passes for 133 yards and three touchdowns – all career highs – in Kentucky’s 62-42 win over NMSU. It was the first 100-yard game for Conrad, who earned third-team Freshman All-America honors last season. Back in July, Conrad was named to the 2016 John Mackey Award Preseason Watch List, which annually honors the most outstanding collegiate tight end.

In the first quarter, Conrad took a short pass from quarterback Stephen Johnson and outraced defenders down the sideline for a 72-yard touchdown, the longest play of his career. In the second quarter, the native of LaGrange, Ohio, took a short pass and darted into the end zone for a nine-yard score. Finally, in the third quarter, Conrad took a screen pass and deftly weaved his way through traffic before bulling into the end zone for a 17-yard touchdown.

The performance by Conrad was one of the best by a Kentucky tight end in some time as he became the first UK tight end with three touchdowns in a game since first-team All-American James Whalen in 1999. Conrad’s 133 receiving yards was the third-most by a tight end in a game in school history, while Conrad is the only UK player to have at least 133 receiving yards and three touchdowns in Commonwealth Stadium history.

In Missouri, the clock never quite ran out on the Cats 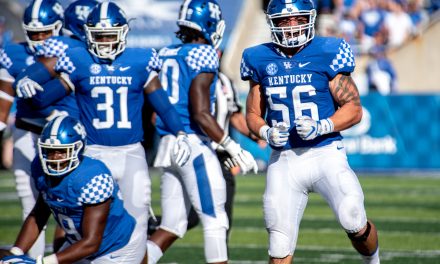 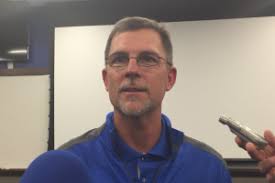 Big Blue Insider @bigblueinsider1
24 hours ago
This is the twitter content I'm here for - especially now. The fun stuff will be there later... https://t.co/8Y0cxirMRW
View on Twitter