Kentucky faces Kansas in Rupp Arena on Saturday and the morning before the game College Gameday will be in town. The day before the game some of the crew talked to local media about the game.

Williams says the UK-KU game will come down to ball screen defense, he also talks De’Aaron Fox & Malik Monk. Williams also discusses Coach K pulling Duke gear from his players. He says it is nothing new, adds some players have sense of “entitlement”

Davis says there is nothing like College Gameday crowd at Rupp Arena.

Greenberg spoke on the impact of Kansas playing without Carlton Bragg. He also talks about Kentucky’s defense.
From ESPN

College GameDay airs at 11 a.m. on ESPN, with the evening edition leading into the game. The show – previewing all the day’s action and discussing the biggest storylines in college basketball – will be at Kentucky for the sixth time. 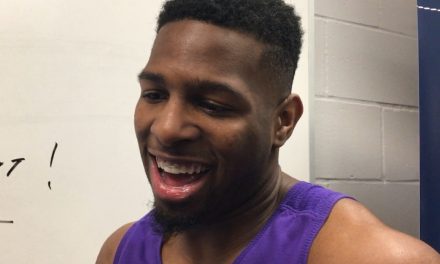 Abilene Christian players before they face Kentucky in the NCAA Tournament