LEXINGTON, Ky. – Nick Mingione has signed a contract extension that will keep him as Kentucky baseball head coach through the end of the 2022 season, Athletics Director Mitch Barnhart announced on Friday.

“The progress our program has made in one year under Nick’s leadership is outstanding,” Barnhart said. “We are committed to making Kentucky baseball a consistent winner both in the Southeastern Conference and on a national level and he is the coach to make that happen. We are excited to have Nick and his family in Lexington for a long time.”

The 2017 SEC Coach of the Year and Perfect Game/Rawlings National Coach of the Year, Mingione completed his first year as UK head coach in June, leading the Wildcats to their first-ever trip to Super Regionals. UK won 43 games overall in 2017 and 19 in SEC play – the second most in school history – after being picked in the bottom half of the league in the preseason. Those 43 wins are also the most for a first-year UK head coach.

Following the season, eight Wildcats were chosen in the MLB Draft, including a school-record six in the first 10 rounds. UK also had team grade-point averages of 3.356 and 3.228 in the fall 2016 and spring 2017 semesters, respectively.

“I’m very appreciative of the commitment Mitch Barnhart, President (Eli) Capilouto and the University of Kentucky have shown to our baseball program,” Mingione said. “My wife and I love Lexington and could not be more excited about being a part of this university and community. I’m also thrilled the rest of the coaching staff is being rewarded for their remarkable efforts in our first season here.”

Mingione will owe the university a buyout payment if he elects to terminate the agreement. The buyout starts at $1 million if he terminates the agreement on or prior to July 1, 2018 and decreases by $200,000 in each subsequent year. 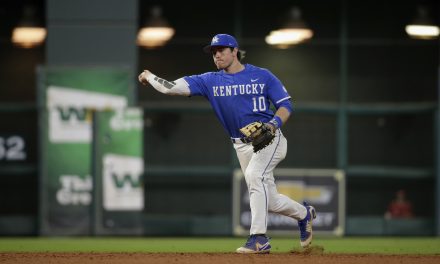