Ugly? Pretty? UK win over Vols was one for eye of the beholder

It was an ugly game. No, it was a beautiful game. It was a game Kentucky fans have seen so many times through the years, they could predict their own misery. And then, incredible happened.

With the Wildcats trailing this Festival of Fumbles, 26-21 to a team that had needed Google Maps to find the end zone for the past month, Kentucky put together a game-winning drive that will stand as only one glorious chapter in a bizarre story of victory.

The Cats needed it because they fumbled so often they acted as though they thought there was a prize for doing it.

On the first play of the game, Mr. Reliable, Benny Snell, tried to spin through a hole way too fast, leaving the ball for an alert Volunteer to fall on it. But in what would become a disturbing pattern for the orange-clad invaders, Tennessee failed to take full advantage.

Kentucky would fumble three more times, helping UT run up an advantage in time of possession that nearly doubled the Wildcats’.   But settling for field goals (and missing a pair of them) instead of touchdowns is why the Vols’ bus ride back to Knoxville was a somber one. Four UK fumbles resulted directly in only six Tennessee points.

And while all four of the Kentucky fumbles gave UT terrific field position, the Wildcat defense made big plays time, again and then again, ringing up seven sacks and 12 tackles for loss.

Oh, sure, Tennessee completed a 26-yard pass on 4th-and-25 in the waning seconds. And, yes, the Vols hung a Hail Mary of a prayer on the last play of the game that actually was answered, only three yards shy of the end zone. But in the end, the Cats had beaten UT for just the second time since 1984.

(The Kentucky defense registered seven sacks and 12 tackles for loss)

“I was joking… with some of the media that even they have to admit that that’s a thing of beauty,” Mark Stoops said. “And it is because how many times were we on the wrong end of that for 33, 34 years or however many years? (Answer – a lot.) There’s been many times when we have played some good football and came up on the wrong end.”

He’s right, of course, and nobody knows that better than one of the fans in the stands Saturday night – Rich Brooks, who was there celebrating the reunion of his 2006-08 teams, the ones that won three straight bowl games. Brooks accomplished a lot of wonderful things in his seven years as the UK head coach – but he never beat Tennessee.

He loved what he saw so much that he phoned Stoops later, just as the current head man went on the air with Tom Leach of the UK Sports network.

(Benny Snell rushed for 180 yards, most ever by a Wildcat against Tennessee, and three TDs)

Leach bought him some time by tap-dancing through the stat sheet. Stoops finally said is goodbyes to Brooks but not before sending the former coach the inside number to the radio station control room.

Brooks used the info to call the “celebrity hot line” and, after sitting through a commercial break, spoke to Stoops on the air – the first time in network history that a former coach called the current coach, live on the air after a game, to offer his congratulations.

He offered the current UK coach congratulations on a victory that wasn’t assured until Stephen Johnson dove into the end zone. It was Johnson who, early in the third quarter, left the field for the locker room after going down hard at the end of a 34-yard run.

Stoops later said Johnson aggravated a pre-existing injury to his left (non-throwing) shoulder. It was a big-time “owie” but Johnson wouldn’t stay put.

The man who replaced him at QB, Drew Barker, took his turn at fumbling, which led to a nine-play Tennessee drive to another field goal. Four plays into the next Kentucky drive, Johnson sprinted out of the locker room and then jogged back onto the field, sending a roar through the crowd and a jolt of excitement through his teammates.

Johnson’s return didn’t pan out right away. Kentucky fans had to watch the Vols increase their lead to 26-21; they also had to watch Tennessee miss a field goal that would have made it difficult just getting the game into overtime.

But the door was propped open and the Wildcats barged through. Snell ran over, around and through the Volunteers until the ball was on the 11-yard-line. Tennessee braced itself for another full dose of Benny. Instead, it got Johnson, skirting right end, going airborne and splitting two defenders by falling into the end zone.

And the vital two-point conversion came on a double reverse pass, Johnson-to-Snell the winning combination, although Snell said that while Johnson put the pass right on the money, “He put it in the light,” Snell said.

Okay, so, Johnson didn’t compensate for the stadium lights hitting his receiver in the eyes. But, Snell said, he put his hands where he thought the ball might be heading and, sure enough, that’s where it stuck.

Tennessee had just enough time for the long bombs but the Vols ended up just short and remained winless in the SEC, something that probably will cost coach Butch Jones his job.

Meanwhile, Stoops rejoiced in the win on this reunion weekend. “Coach Brooks (being) back here and all the bowl teams and the bowl victors,” he said. “Coach told me, he’s like, ‘Get this one.’ He said, ‘I was never able to get Tennessee’ and it was important for him for us to get that and to win and for all the ex-players that are here and build our tradition. It’s important to me and these players, we’re very prideful when they came back.”

And they can leave saying, they saw the Wildcats beat Tennessee, for just the second time since 1984. They know – it was ugly. And, it was beautiful. 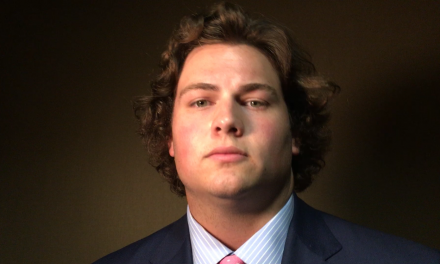