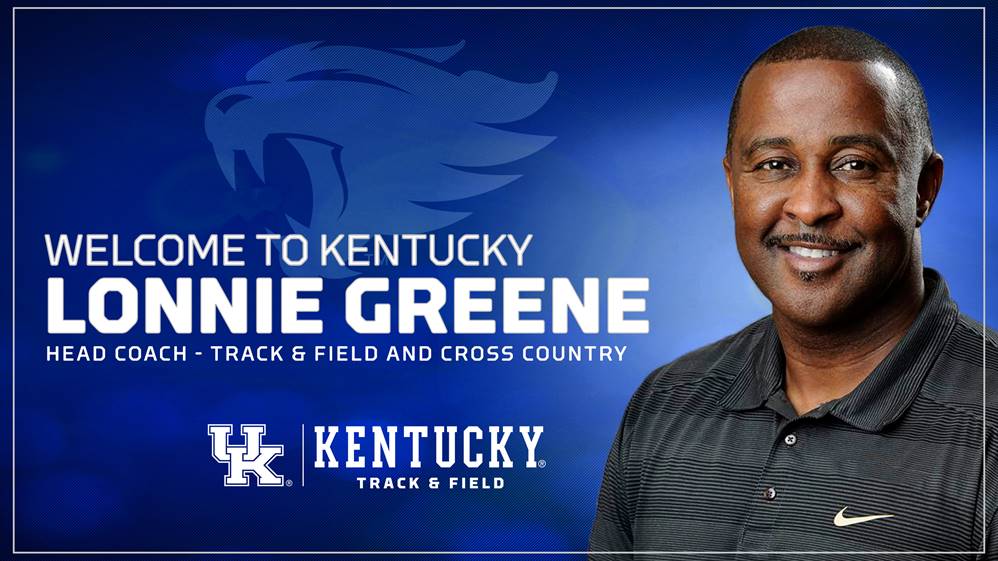 Comes to UK after successful head-coaching run at Purdue

“Lonnie is a quality person who shares our commitment to fostering growth and continuing to build our track and field and cross country programs in all facets,” Barnhart said. “I had the pleasure of watching him and his team in person last month at nationals and was so impressed by the energy and unity of his team. Getting a chance to spend time with him during the interview process only solidified the impression he made.

“Lonnie will bring the same integrity to our program that he did in establishing Purdue as a contender on a national level. He has a championship mentality honed over the many seasons he spent in our conference at Arkansas, as well as a focus on helping the young people he leads grow as students. We are pleased to welcome Lonnie, his wife LaTayna and his entire family to our UK Athletics family.”

“I’m excited to have the opportunity as head coach at Kentucky,” Greene said. “Before I go any further I want to thank everyone I worked with at Purdue. They gave me a chance and I’ll always be so grateful to have worked with them. Thank you to Mitch Barnhart and Jason Schlafer for their leadership and for trusting me to take on this role at UK. I look forward to hitting the ground running building winning teams in the classroom and on the track. I can’t wait to start leading this great program. Go Big Blue!”

Greene has been named Women’s Head Coach of the Year in the Great Lakes Region three times in the last two years by the U.S. Track & Field and Cross Country Coaches Association, twice for outdoors and last year for indoors. The last two seasons have been historic ones for the women’s team, with the Boilermakers achieving their highest ranking and NCAA finish ever. Purdue’s point total of 34 at NCAA outdoors in June was also the highest in school history, fueled by a pair of runner-up finishes. Senior Devynne Charlton – the reigning B1G Athlete of the Year – finished second only to Kentucky’s Jasmine Camacho-Quinn in the 100-meter hurdles, while the Purdue 4x400m relay team also claimed silver.

Greene has coached standouts across the board, with a 21 different Boilermakers earning 60 First-Team All-America honors across 24 events in cross country and indoor and outdoor track and field over his six seasons. Greene’s Purdue teams have also been named USTFCCCA Academic All-America.

“I just feel he comes from an honest point of view,” said 2016 OIympian Carmiesha Cox, whom Greene recruited and coached at Purdue. “That’s the one thing I looked for in my recruiting visit that I didn’t see in other schools. I heard these people speaking to me but I didn’t hear the honesty; I didn’t believe what they were selling to me. I feel like everything he says it comes from his heart. He doesn’t sugarcoat anything; he gives it to you point blank. It’s all real and I can appreciate that.”

Prior to his time at Purdue, Greene spent 16 seasons as an assistant in the Southeastern Conference. Greene coached with the women’s program at perennial power Arkansas, serving as associate head coach in charge of sprints, hurdles, horizontal jumps and multi events from 2000-2012. In each of his last two seasons with the Razorbacks, he was named USTFCCCA South Central Regional Assistant Coach of the Year. In 2004, he was named National Assistant Coach of the Year.

“When you meet him, it doesn’t take but a couple of minutes to realize that this is an individual who really cares,” said two-time National Championship-winning and 32-time SEC championship-winning Razorback women’s head coach Lance Harter, who hired Greene at Arkansas. “He really wants to know you, not just as an athlete but as a person. His strong Christian foundation is genuine. He’s a true family man and he’s such a caring individual. People pick up on that ever so quickly. He’s been a blessing to anybody who’s had him in his life.”

Greene was also an assistant coach with the University of Minnesota women’s program in 1995-96. He began his coaching career as a men’s and women’s assistant at what is now Missouri State University from 1991-95.

Greene, whose full name is Rolando, is a native of Nassau, Bahamas, but has roots in the Bluegrass State. He earned his B.S. from Murray State University in 1989. He is married to LaTayna Stewart. The couple has a daughter, Charisse; three sons, Cameron, Isaiah and Jacob; and two grandchildren, Tylan and Caleb.

Big Blue Insider @bigblueinsider1
2 days ago
This is the twitter content I'm here for - especially now. The fun stuff will be there later... https://t.co/8Y0cxirMRW
View on Twitter