Kentucky at the podium

THE MODERATOR: Kentucky Wildcats are here for a ten-minute session. John Calipari will open up with a statement. We have Reid Travis and PJ Washington with him. After the statement, we’ll have questions for all three gentlemen from Kentucky.

Proud of these guys. Proud of my team. We didn’t play particularly well, but give them credit for making us play poorly.

Q. PJ and Reid, defensively they do anything differently in the second half or overtime to take you out of the stuff that you normally like to do?
PJ WASHINGTON: They pressured us on defense. They tried to make all the catches hard, and they were boxing out and getting rebounds. They forced us to get one shot up and got back in transition and scored every time.

REID TRAVIS: Just second that. Big part of what we do is rebounding, offensive rebounding. They just came out, trying to be more physical, deny catches is on us for letting them be effective at that.

Q. PJ, like can you just describe where the confidence was going into overtime after such good — like at regulation, you guys played so well?
PJ WASHINGTON: We had a lot of confidence. We tied the game up, and we felt like we had a chance to win. You can’t have — you can’t not have confidence in a situation like that. So I mean, definitely have to have confidence and feel like you’re winning the game at all times of the game.

Q. John, what went into the decision to keep Ashton Hagans at point guard, especially as he kept turning it over?
JOHN CALIPARI: Well, you go through a whole season and some of the stuff you have to understand is bigger than one game. I know everybody will go nuts and say what are you talking about? There are times you have to let guys play through stuff and you got to get them to change on run. Then they understand that the only thing they’re trying to conquer is themselves. If you don’t like how you’re playing, change. Immanuel couldn’t make a shot. So he wasn’t exactly playing confidently, either.

We put Jemarl in. He got scored on a few times right there and fouled it. I felt comfortable with Ashton. I know he was turning it over and — but you know, Tyler — we just — guys didn’t play well. I want to tell you that I got to give Auburn credit for really getting up in and bumping and grinding and doing some stuff that got these guys a little off kilter.

We were able to play and throw it inside, and I thought we did a good job to survive. You’ve got to have better perimeter play and we have all year until today. Now, I’m going to give credit to Auburn. I’m not saying that’s why we lost.

They made us play the way we did, but when you look at it, we held them to 40 percent, 30 percent from the 3. We out-rebounded them by 4. We outshot them from the floor. They shot more free throws. It’s not because of officiating. First game we played in a long time that someone shot more free throws than us because of how we play. We want you to grab us. That’s how we play. Try to go at the goal.

That being said, the numbers say that boy, you should have won. We had a few too many turnovers at inopportune times. That kind changed the game.

Q. You guys got them into massive amounts of foul trouble in the paint. Why is it, what did they do differently that maybe you guys couldn’t put them away when you had the big lead?
REID TRAVIS: I mean, they’re a scrappy team. We knew even if we had a lead, that’s a team that can get hot quick. Felt like there were some plays that balls we didn’t come up with, they able to get 3s out of it, get free throws and fouled. Right on the brink of kind of changing that lead, they were able to come back and get hustle plays and felt like that really sparked them going forward.

PJ WASHINGTON: Yeah, piggyback on what he said. We missed a couple shots and they got in the offense and made the most out of it, made 3s.

Q. Coach Cal, this has been the best free throw shooting team you have. Today guys go 12 of 21 at the line. Anybody you can attribute to that?
JOHN CALIPARI: No. Stuff happens. I mean it’s just — it happens. Let me say this: All that set aside, we still could have won the game. One play, one shot, one rebound. I’ll say this to everyone here: The hard thing when you’re coaching young kids like really young, that when we had four days to prepare for Houston, we could really dig down and drill and drill. When you have 36 hours and you say do not let them drive right and you show them on tape, you go over it but you don’t have time — they shot 15 layups right-handed today. Do not let them — the last one they just drove in and went right and shot it.

Again, when you’re talking 17 and 18-year-old kids, there’s going to be slippage sometime. The same with free throw shooting. Sometimes you get up against it and you miss some shots. But I’ll just tell you, this team, and I’ll get off point on this, what a joy it was to coach this year. I mean, I had more fun and I still challenged them, I still held them accountable. I was on guys, but I knew that they would respond and I knew that they were going to be in that gym and going to work and share and sacrifice for each other.

That’s why I wish the season kept going. I mean, I wanted to see one more weekend, wanted Reid to be able to go back to Minnesota, which he deserved for what he’s done for this program and us, but this is — when it’s one game, oh, you beat them twice. Once you beat them by 30, doesn’t matter. One game. This was stuff that happens.

Q. Reid, can you put into words — you were very emotional after the game. What goes through your mind when that final horn sounds?
REID TRAVIS: I mean, just a lot of emotions. As far as this being my last college game, been through a lot of adversity, lot of ups and downs. Obviously being able to come here, it’s been a blessing and thankful for the opportunities. Lot of emotions not being able to finish it the way I wanted to, but that doesn’t take away from the experience that I had. This has been one of the best years of my life playing basketball, and I just wanted to end it the right way with this group of guys.

Q. Cal, you touched on it a second ago. Could you elaborate on what Reid meant to this program over the last year?
JOHN CALIPARI: To have a guy come to this program and absolutely trust — we never promised him he would start or how many minutes. I don’t do that. But having enough trust to know and enough faith in himself to come here and then through the ups and downs, what we’re doing never changes, what a great lesson if anybody else was watching and all these young kids were watching.

But I just tell you personally, what a pleasure. I got on him, too, now. What a pleasure to coach him. He responded. You know, with the injury, you know, I told him, “If you can’t come back, I’m good.”

“Don’t you — I’m coming back.” He worked and he did it and, you know, just — it just stings, but this is part of sports. I feel sick, feel sick for these kids. I’ll go back, is there anything else we could have done, is there any other ways we could have played?

I tried just about everything, but I’ll probably find four, five things I should have done or tried. Right now, couldn’t tell you what those are, but I probably will spend some time that way with myself. But for him, he’s put himself in a great position and he helped this program. I couldn’t be more thankful and blessed that I had a chance to coach him.

THE MODERATOR: Thank you, John.

Thank you gentlemen. Congratulations on a great season. 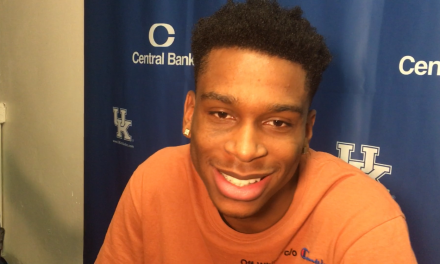 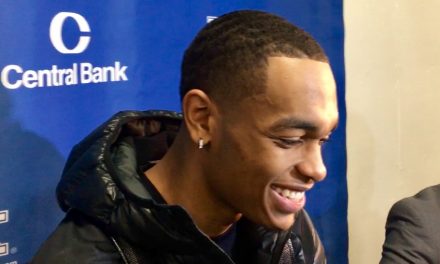 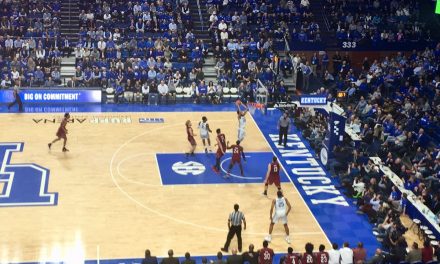 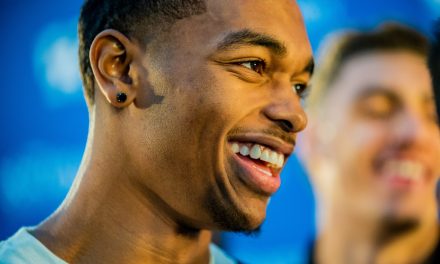 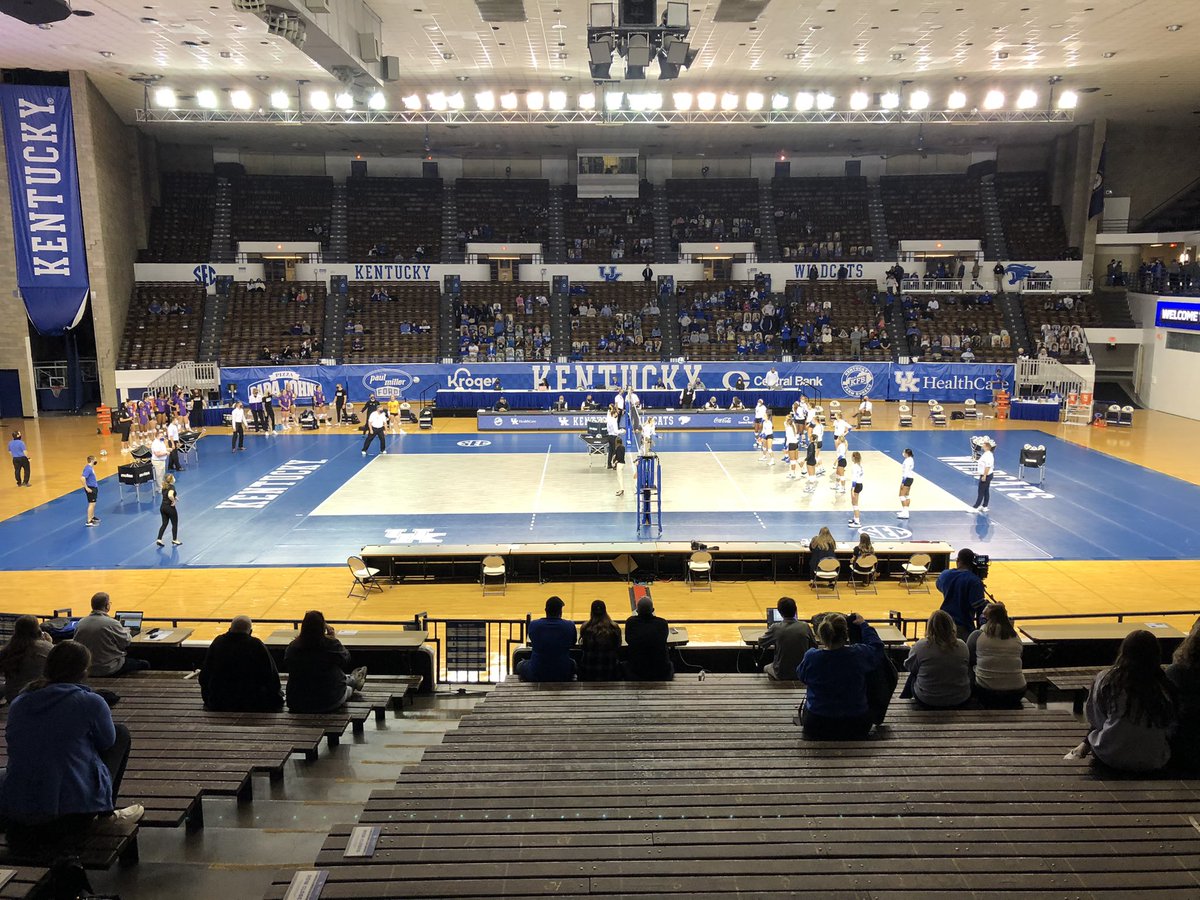 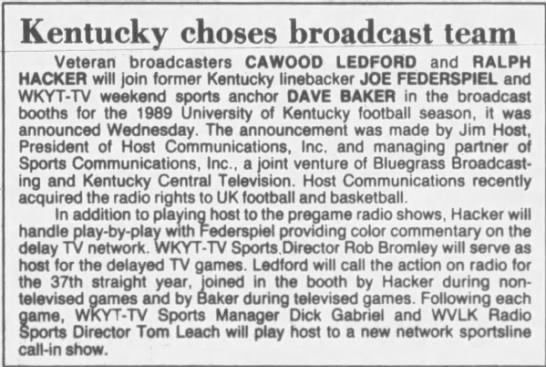