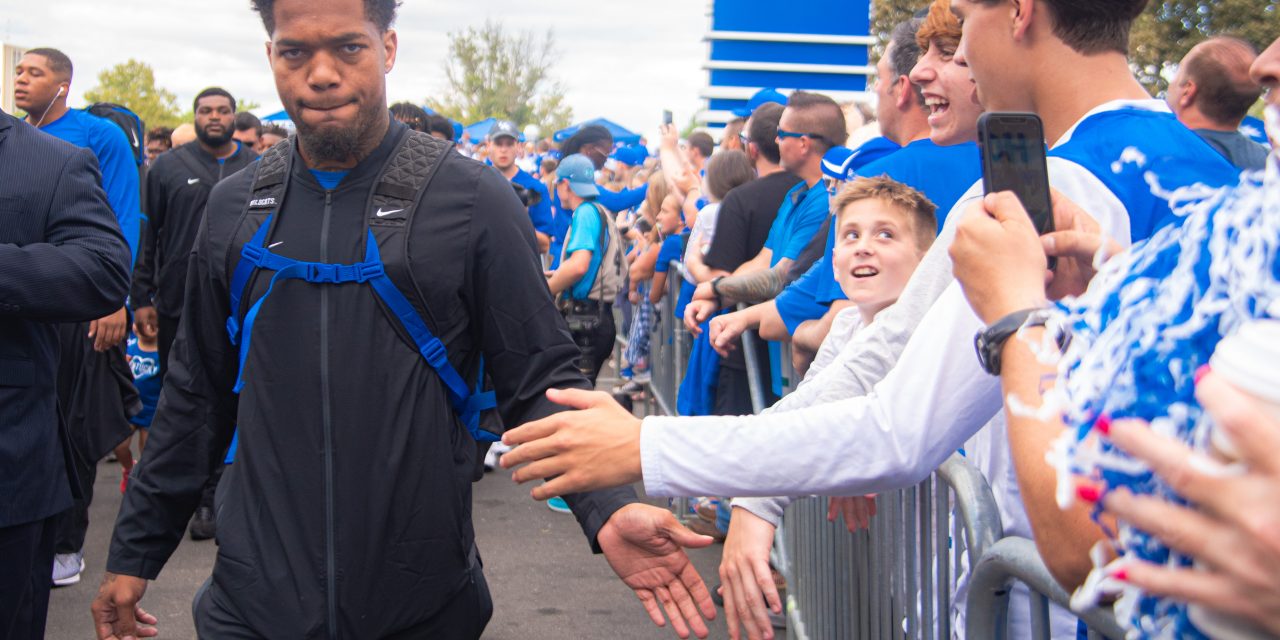 The 2019 Kentucky Football season is off to a rough start. Before turning your attention to basketball, consider these five reasons to keep watching the Football Wildcats.

For the first time since 2013, the Kentucky Wildcats have started conference play 0-3. After winning their first two games of the season over Toledo and Eastern Michigan, the Wildcats have dropped three straight.

The losing streak saw them blow a double-digit fourth-quarter lead at home to the No. 9 Florida Gators and get pushed around on the road against unranked Mississippi State and South Carolina teams.

With starting quarterback Terry Wilson lost for the season, back-up Sawyer Smith also injured and poor play in the trenches many Kentucky fans are starting to turn their attention towards basketball season. This may not be a wise decision as despite all their problems this 2019 Kentucky team still has a chance to rack up wins and reach a bowl game for a fourth straight season.

Here are five reasons to still tune in each Saturday.

While Wilson may not be back this season, several injured Wildcats could return as soon as the Arkansas game right after this week’s bye. Isaiah Epps and Phill Hoskins who were both significant contributors to last year’s 10 win Kentucky team have yet to play a snap this season, but head coach Mark Stoops did say both are likely to return soon after the bye. Other injured players such as defensive backs Taj Dodson who recovered a fumble against Florida and MJ Devonshire who has two tackles and a pass defended this season are also likely to return in the near future. Perhaps most importantly, time will heal Smith’s injuries which are not season-ending and running back Kavosiey Smoke will get the bye week to recover from a painful migraine that held him to just two carries against South Carolina.

While having star receiver Lynn Bowden at quarterback isn’t at all what Stoops and company want it should provide entertainment for the Big Blue Nation. Bowden has as much speed as anyone in the country and will be given plenty of opportunities to run the ball from under center. When given the chance to play under center in Kentucky’s last drive against South Carolina Bowden broke off a 26-yard run and completed his only pass attempt for nine yards to Josh Ali to help spark the team’s lone scoring drive. While no one knows if the Bowden quarterback experiment will work like it did in his high school days, there’s no doubt it’ll be entertaining and have Kentucky fans reminiscing of the Randal Cobb days.

Last chance to watch some key players in Kentucky Blue

While Kentucky’s 2019 senior class doesn’t include the superstars who were among college footballs best players like 2018, there are several key contributors to turning the Kentucky Football program around playing in their final season as Wildcats. This year’s senior class includes Logan Stenberg who has been the Wildcats left guard for four seasons and his project to be selected early in next year’s NFL Draft. Breakout star Ahmad Wagner who’s made several circus catches and drawn too many pass interference penalties to count also is in his last college season. Finally, defensive lineman Calvin Taylor and T.J. Carter who have recked havoc on opposing quarterbacks over the course of the last four seasons will be gone next year and home-state star and fan-favorite Kash Daniel will also be departing. Not only will Kentucky lose these program changing seniors but juniors such as Bowden, Drake Jackson, Landon Young and Max Duffy may all be candidates to leave for the NFL a year early. Enjoy watching these Kentucky greats while they’re here because it won’t be much longer.

Kentucky has a favorable schedule

While Kentucky lost winnable games against average Mississippi State and South Carolina teams, they were road tests in the SEC. Some of the games remaining on the Wildcats schedule are far more manageable and will take place at Kroger Field. After the bye, the Wildcats will host an Arkansas team that hasn’t won a conference game since 2017 and is just a game removed from losing to San Jose State. Kentucky will then face two tough opponents in Georgia and Missouri but then will host a Tennessee team that’s been nothing short of a train wreck this season, visit Vanderbilt who is 1-3 to start the season and generally has more visiting fans in their stadium than home fans, host U-T Martin of the FCS and welcome Louisville who’s in the midst of a major rebuild. If Kentucky can steal a win over Georgia or Missouri and run the table in the rest of their games you’re looking at an eight-win season. Even if the Cats lose to both Georgia or Missouri and win out, they would go 7-5 despite losing their top two quarterbacks and a great deal of their 2018 production in the NFL.

This is not the old Kentucky

Despite an 0-3 start in conference play and being blown out in games that last season they probably would’ve won the 2019 Kentucky Wildcats are not the same as those who won two games in 2012 and 2013. They are closer to the team that won 10 games a year ago. Stoops and his staff have completely changed the culture of the program, and this year’s team has given their full effort to manage without some of their key players. The team seems determined to turn their season around and reach a bowl game for the fourth straight season for just the second time in school history and still have a high chance of doing so.

May 5th podcast with Doug Flynn 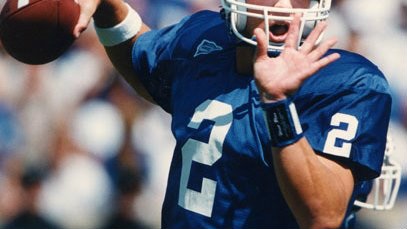 2 DAYS UNTIL KENTUCKY FOOTBALL KICKS OFF