The No. 2 Kentucky Wildcats opened Rupp Arena with a bang as they defeated the Eastern Kentucky Colonels by a final score of 91-49 Friday night.

Kentucky got off a hot-start when Khalil Whitney threw down a put-back slam and then hit a jumper to score Kentucky’s first four points of the game. Whitney’s hot start would help guide Kentucky to a 14-0 run to start play as Nick Richards, Immanuel Quickley and Ashton Hagans got in on the scoring parade and the Wildcat defense held EKU scoreless for the games first seven minutes of the game. The Wildcats would keep the momentum going the entire first half as they took a 21 point lead into the halftime locker room. First-half scoring leaders included Quickley with 10, Richards with nine, and Keion Brooks with eight.

Like in the first half, the Wildcats started fast in half number two as they went on a 14-3 run thanks to a pair of slams from Richards a three-pointer from Nate Sestina and buckets from Whitney and Brooks. The Wildcats would continue to add to their lead throughout the half as Richards continued to dominate, finishing the day with 21 points. Kentucky also continued their advantage on the glass as they out rebounded Eastern 54-25 to close out the victory.

Despite having suffered an ankle sprain less than two weeks ago, Nick Richards was again a dominant force for the Wildcats Friday evening. The junior recorded a double-double with a team-high 21 points and 10 rebounds. If the Wildcats get this from Richards all season, you may be looking at the national championship favorite.

Despite not having E.J. Montgomery, there were no problems for the Kentucky front-court Saturday night as Nate Sestina joined Richards in having a big-night. The graduate transfer also recorded a double-double as he scored 12 points and grabbed a team-high 11 rebounds.

Here’s a look at tonight’s highlights courtesy of the UK Sports Network. 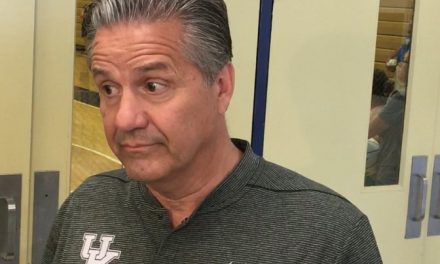 Big Blue Insider @bigblueinsider1
11 hours ago
Covered her for all four years at @KentuckyVB. Never realized @leahedmond13 ‘s hands were so big... https://t.co/ILRDFXleJt
View on Twitter

0
5
Big Blue Insider @bigblueinsider1
1 day ago
Might need to pop that corn just a leeetle longer... https://t.co/0rqeZYH2Qx
View on Twitter
0
6