The sports world is mourning the heartbreaking loss of NBA legend Kobe Bryant who died in a helicopter crash Sunday.

As the news broke, several of the NFL’s best players were in Orlando playing in the 2020 Pro Bowl. Three of those players are former Kentucky Wildcats, including Za’Darius Smith.

After recording a sack, Smith gathered some of his NFC teammates to honor Bryant with a basketball celebration.

See the touching tribute below.

Za'Darius Smith just gathered up his teammates to put on a post-sack Kobe tribute pic.twitter.com/80p4ZjrfI1

In a sideline interview shortly after the sack, Smith told ESPN, “It was a tribute to Kobe and his family … this is what we’re gonna do ‘2 steps, then a fadeaway’ for him. For everyone to participate as a team, I just hope that touched a lot of people in a special way.” 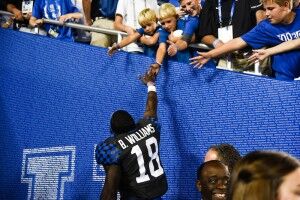 Big Blue Insider @bigblueinsider1
9 hours ago
Today’s View from the office, sitting in for Darren Headrick. First pitch at 1 PM; pregame at 12:45. Cats are playing for a sweep of Appalachian state. Listen on 98.5 and watch on UK https://t.co/aR7DNyNopS https://t.co/j34XaevcOn
View on Twitter

3
9
Big Blue Insider @bigblueinsider1
9 hours ago
I urge you to see the documentary, “The Team,” about the ‘96 team. @CoachMarkPope anecdotes are hilarious - and his recollections helped make the movie. @CameronMillz https://t.co/7vYG44UmuK
View on Twitter

Oscar Combs @wildcatnews
A big shoutout and congrats to former Wildcat & current Brigham Young @CoachMarkPope on his Cougars’ 91-78 upset of No. 2 Gonzaga last night. Mark is one of those guys you root for every time he goes to battle. One of my all-time favorites. Huge piece of ‘96 champs. @KentuckyMBB https://t.co/5qlDEcG8SY
2
24
Big Blue Insider @bigblueinsider1
1 day ago
“Can you believe I’m sitting next to ⁦ @curtisburch⁩ ?” https://t.co/rkyQa280je
View on Twitter