Best Kentucky Wildcats to Wear No. 30

It’s April 30 and that means it’s time to look at three of the greatest Kentucky Wildcats to dawn the No. 30 on their uniform.

Here we find two of Kentucky Basketball’s finest and one of the UK Baseball’s all-time greats.

Our first No. 30 is the legendary Frank Ramsey. Not only is Ramsey among the best Basketball players in UK history but earned All-SEC honors as an outfielder in 1951, 1952 and 1954 for the baseball program.

On the hardwood, Ramsey spent three seasons in Lexington and scored 1,344 career-points and grabbed 1,038 rebounds.

After UK was forced to forfeit their 1952-53 season due to a point-shaving scandal, Ramsey graduated from UK and became eligible for the 1953 NBA Draft, where he was selected 5th overall by the Boston Celtics. Despite this, he was able to return to Lexington for one final season in which he averaged a career-best 19.6 points.

Ramsey joined the Celtics in 1954 and ended up helping the team win seven NBA Championships. His NBA No. 23 is retired by Boston while his college No. 30 is retired by UK.

It only took one season for Julius Randle to leave a respected legacy in Lexington. Randle averaged 15 points and 10.4 rebounds for the 2013-14 Wildcats to earn the SEC Freshman of the Year award, All-SEC Freshman Team honors, First-Team SEC honors and was named a Third-Team All-American. His 24 double-doubles were the second most double-doubles in a season only behind Dan Issel.

Randle will be best be known for his contributions during Kentucky’s 2014 NCAA Tournament. The Cats entered the tournament as a No. 8 seed and odds stacked against them but with Randle leading the way found a way to the National Championship game.

The forward averaged 14.8 points and 9.8 rebounds to lead the Wildcats to the National Championship game, where UCONN defeated them. Randle was named an NCAA Regional Most Outstanding Player and to the All-NCAA Final Four Team.

After just one season in Lexington, Randle declared for the 2014 NBA Draft, where he was selected seventh overall by the Los Angeles Lakers.

The 6-foot-10 inch Sean Hjelle is one of the best pitchers ever to take the mound for the Wildcats. As a true freshman in 2016, Hjelle was named an All-American mention after posting a 3.74 ERA in 21 relief appearances.

Hjelle moved into UK’s starting rotation in 2017 and pitched to a 3.89 ERA in 108.2 innings of work. Batters hit just .243 against him as the right-hander put together an 11-4 record. He was named the SEC Pitcher of the Year to become the first Wildcat to earn that honor. He also was named First-Team All-SEC and an All-American. As the ace of UK’s staff, Hjelle guided the 2017 Cats to the NCAA Super Regionals for the first time in program history.

As a Junior in 2018, he posted a career-best 3.44 ERA and held batters to a .232 average. After the season, Hjelle was selected in the second round of the 2018 MLB Draft by the San Francisco Giants and opted to sign with the team.

Interviews after Kentucky defeated Buffalo to advance to the sweet 16 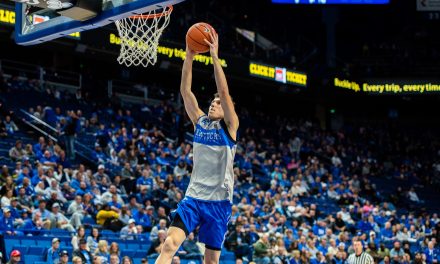 Dick Vitale @DickieV
Can u believe this as I get prepared for a surgical procedure 7 am Dr Kenneth Meredith walks in wearing a KENTUCKY CAP / the guy loves @UKCoachCalipari Cats fans r everywhere. My heart is filled with gratitude from all the LOVE I have rec’d . 🙏🙏🙏needed https://t.co/zefPR1RCN0
9
184
Big Blue Insider @bigblueinsider1
3 days ago
Meanwhile, in Athens… https://t.co/zG70xLppwy
View on Twitter