It’s May 7 and that means it’s time to look at three of the greatest Kentucky Wildcats to dawn the No. 7 on their uniform.

Here we find two UK Athletics Hall of Famers and one likely to be inducted in the future.

After his college career, he was drafted in the fourth round of the 1994 MLB Draft by the Chicago White Sox and played five pro seasons split between Chicago and the Florida Marlins. He was inducted into the UK Athletics Hall of Fame in 2011.

Sarah Rumely is one of the best to play for the UK volleyball program. She is one of just two players (Leah Edmond) in program history to be named SEC Freshman of the Year (2006) and SEC Player of the Year (2008).

The All-American was inducted into the UK Athletics Hall of Fame in 2017 and is now an assistant coach at LSU.

While he wore the No. 27 in his first two college seasons, Mike Edwards is more than deserving of a spot on this list. In his final year in the 27 jersey, Edwards made 100 total tackles and defended eight passes to help guide the 2016 Cats to a bowl game.

Dawning No. 7 as a Junior, Edwards grabbed four interceptions, made 96 total tackles and defended seven passes to send the Cats back to a Bowl Game. As a senior in 2018, Edwards made 82 total tackles, with 9.5 coming for a loss. He also grabbed two interceptions, returning one for a touchdown and both forced and recovered a fumble. His contributions helped guide Kentucky to just their third 10-win season in program history, which included a Citrus Bowl victory over Penn State.

Edwards was selected in the third round of the 2019 NFL Draft by the Tampa Bay Buccaneers where he played in 15 games and made seven starts as a rookie. 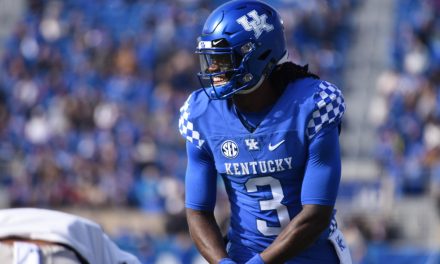 Big Blue Insider @bigblueinsider1
3 hours ago
When @UKCoachSkinner arrived, #SECvolleyball was the Florida invitational. Gators are still strong but @KentuckyVB now… https://t.co/nrt4NV4h8g
View on Twitter
1
10
Big Blue Insider @bigblueinsider1
20 hours ago
Never heard of it but willing to give it a try. And I wasn’t aware you had dyed your hair red… https://t.co/K5h482KTcA
View on Twitter