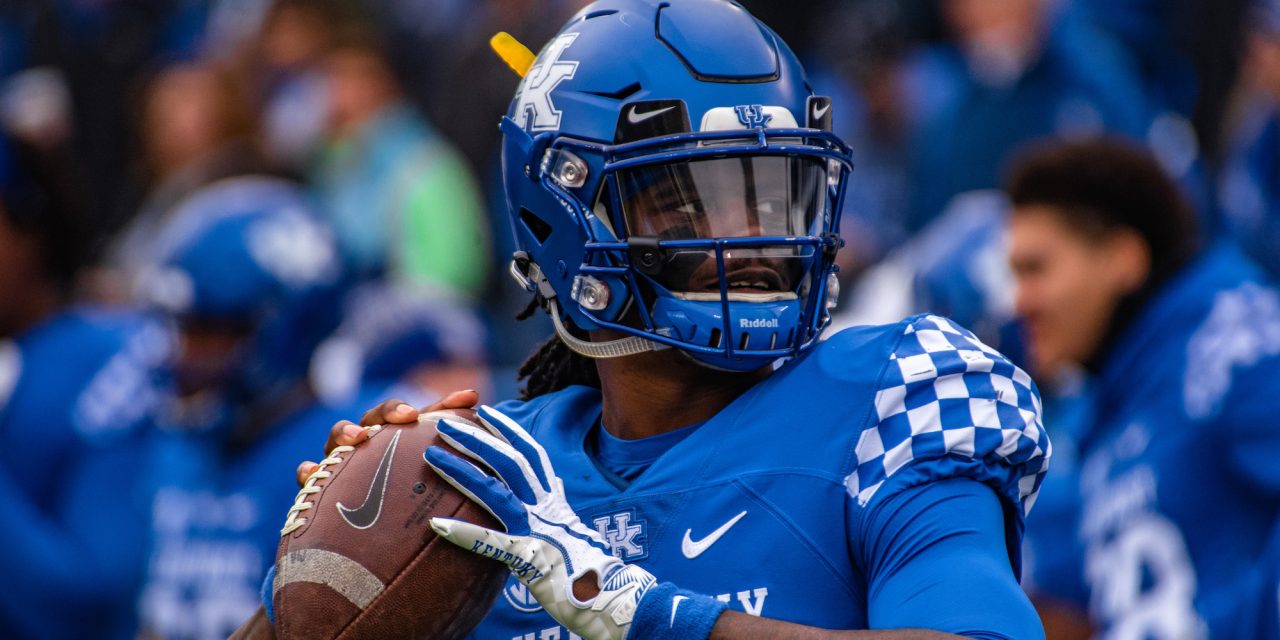 If the 2020 College Football season starts on time amid the COVID-19 pandemic, the Kentucky Wildcats will kick off their season 74 days from today.

With kickoff creeping closer and closer, the Big Blue Insider will be breaking down every player on the 2020 Wildcats roster. We will start the process by looking at previewing each position group daily, starting with the quarterbacks.

There will be Lynn Bowden seemingly putting on a one-man show under center in 2020, but UK has three quarterbacks returning from injury and two new arrivals which should make for a more balanced offense.

Here is a closer look at each quarterback on the Wildcats 2020 roster. 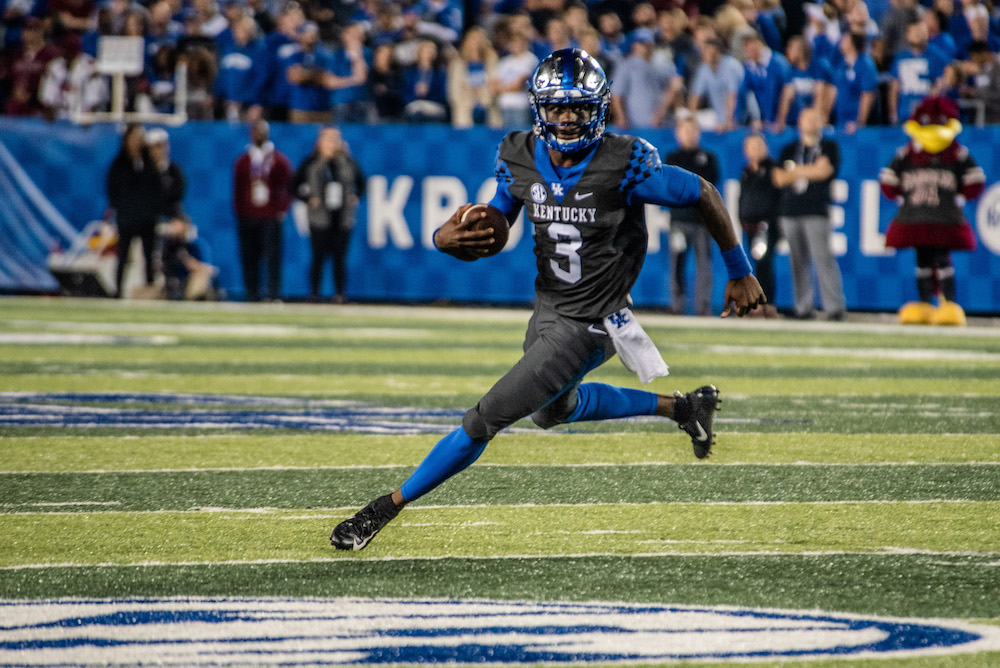 Terry Wilson (#3) on the move. Photo by Brandon Turner

Terry Wilson will enter his third season in Lexington since transferring to UK from Garden City Community College in 2018.

Wilson earned the nod as the starting quarterback immediately upon arrival in 2018 and led the program to just it’s third 10-win season, led the team to their first win over Florida in 31 years, and to a Citrus Bowl win over Penn State.

In 2019, Wilson’s season was cut short after just two games as he tore his patellar tendon in a Week 2 victory over Eastern Michigan. All in all, Wilson is 12-3 as Kentucky’s starting quarterback and will look to increase his win total in his final college season.

Success will depend on health for the dual-threat quarterback. Wilson relies heavily on his legs to make plays and if his mobility is limited due to injury, he will need to rely heavily on his arm that was inconsistent at times in 2018 but seemed to be improving in 2019.

As long as he is ready to go for Sept 3, Wilson will surely be Kentucky’s starting quarterback as he looks to end his college career on a high note. 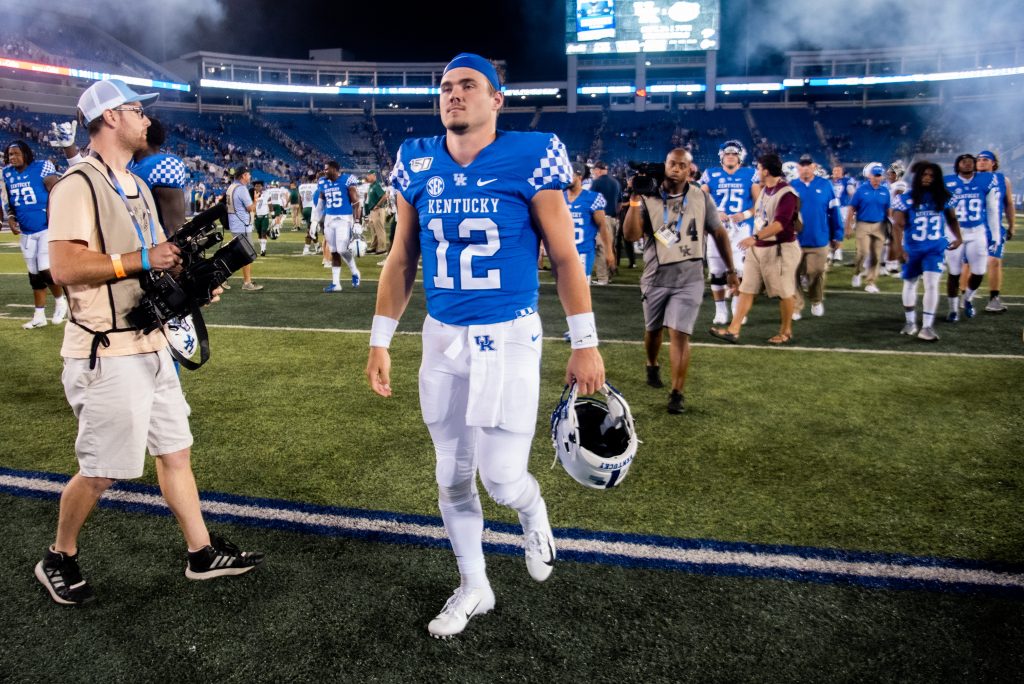 After Wilson suffered his season-ending injury, the plan for the Wildcats was to go with Troy grad-transfer Sawyer Smith. Smith had led the Trojans to a Bowl win in 2018 and offered UK plenty of confidence despite losing their starter.

Smith entered Kentucky’s Week 2 victory in the third quarter over Eastern Michigan and threw for 76 yards and two touchdowns. The following week against No. 9 Florida, Smith guided UK to a 21-10 fourth quarter lead after tossing two touchdowns, rushing for one and throwing for 267 yards but suffered a hand injury attempting to make a tackle on an interception that would derail the rest of his season.

The Gators rallied back to beat the Cats and Smith struggled in ugly losses to Mississippi State and South Carolina on the road before finally being sidelined in favor of Lynn Bowden. Smith made spot appearances later in the season but never returned to the starting lineup.

Back to full health, Smith is poised to be ready in case Wilson isn’t fully himself or, in any scenario, he is needed and for this time be prepared to prove his value in the SEC. 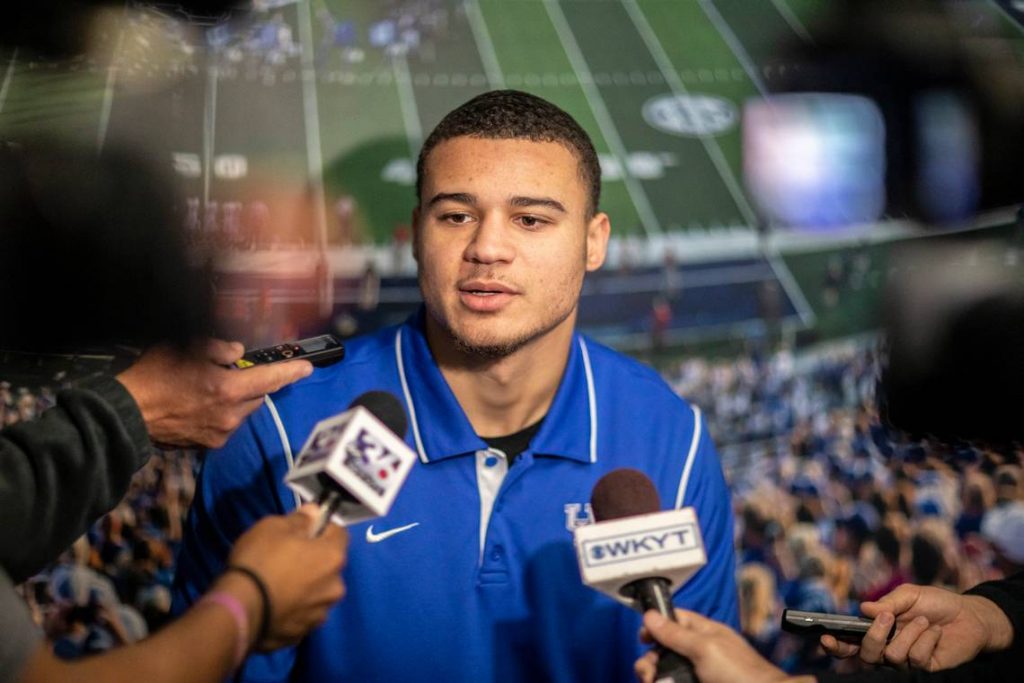 After parts of two seasons with the Auburn Tiger, former top 50 high school prospect Joey Gatwood arrived on campus at UK in January as a transfer.

Gatewood appeared in eight total games at Auburn, including one in 2018 and seven in 2019 in which he then threw two touchdowns and ran for three. Having lost the starting job in camp to the 2019 SEC Freshman of the Year Bo Nix, it did not come as a huge surprise that Gatewood decided to transfer.

It’s unclear whether or not the former four-star recruit will obtain a waiver to play for the Wildcats last season, but he will compete for playing time with Wilson and Smith if he does. Regardless, the plan is likely for Gatewood to take over as starting quarterback for the 2021 and 2022 seasons. 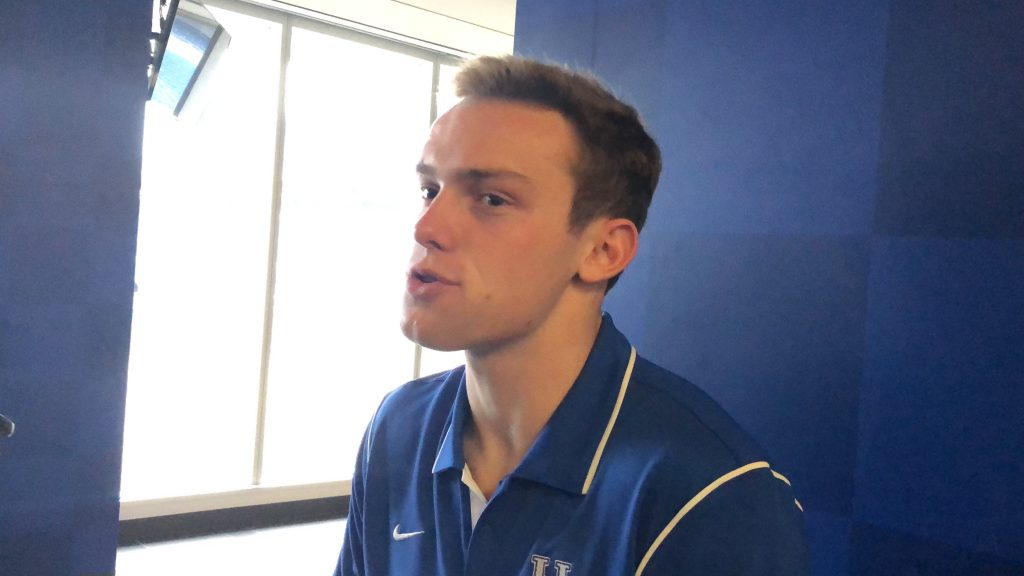 Beau Allen talks to the media. Photo by Aaron Gershon

Beau Allen is the lone true freshman quarterback joining the Wildcats this fall. Allen enrolled early at Kentucky back in January after a stellar high school career across town at Lexington Catholic School.

Last season Allen was named the Paul Hornung Award winner given to the top high school player in Kentucky after throwing for 3,683 yards and 38 touchdowns with only eight interceptions. He also led his team in rushing with 478 yards and 12 touchdowns.

Allen is the son of former UK quarterback Bill Allen and decided to follow his father’s footsteps despite offers from Georgia, Washington State, West Virginia, Duke and others.

The Wildcats coaching staff views Allen as a future potential starter. Like many recent UK true freshmen, he will likely be held to four or less games to maintain a redshirt and gain an extra year of college eligibility. 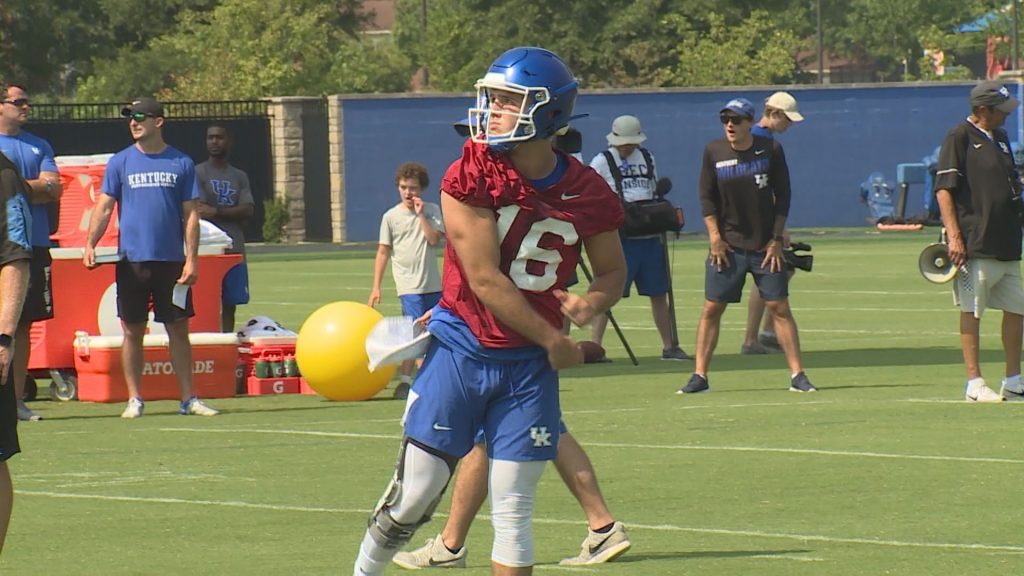 Nik Scalzo arrived in Lexington in 2019, recovering from a torn ACL that he suffered back in 2018. All summer long, Scalzo caught the eyes of the UK coaching staff, but in a scrimmage, just weeks before the season opener, he tore the same ACL during a scrimmage forcing him to redshirt and sit out the entire 2019 season.

The injury cost Scalzo potential playing time as Stoops admitted that he likely would’ve been the third option behind Wilson and Smith, who both suffered injuries during the season.

In 2020, Scalzo will likely be behind four quarterbacks on the depth chart; thus, health and strong play in training camp will be key to maintaining hope to become the Wildcats starting quarterback of the future.

As a Senior in high school, he accounted for over 2,000 yards and 20 touchdowns. In 2019 Delahunty practiced with the Wildcats and earned Dean’s List honors in the classroom. 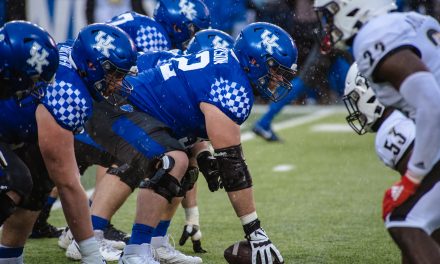 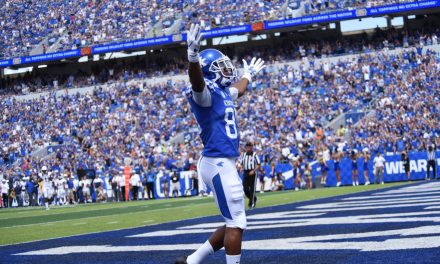 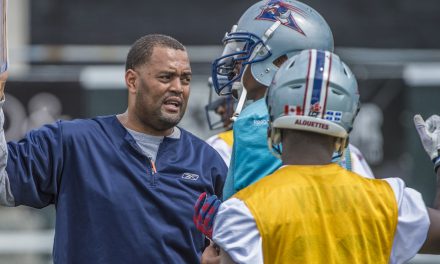 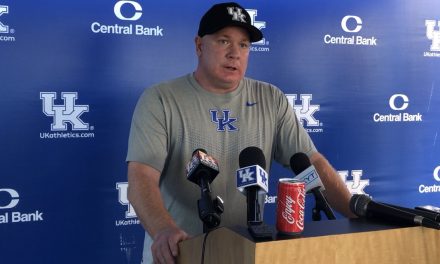