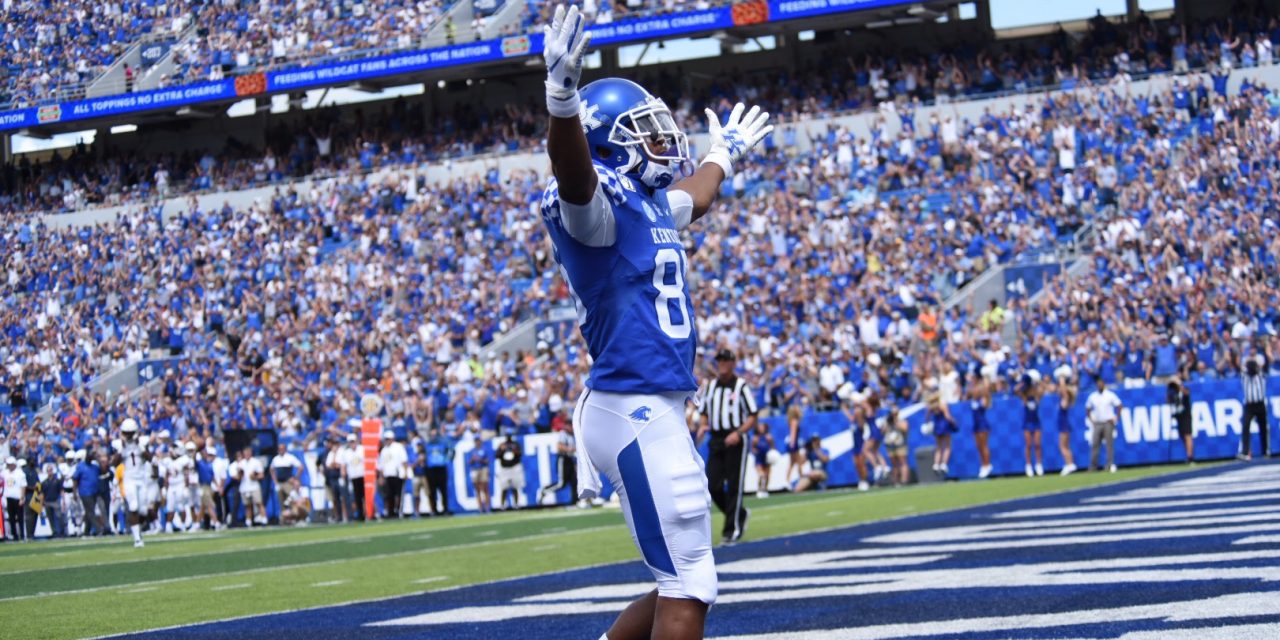 The 2019 consisted of mostly blocking for the Kentucky Wildcats wide receivers after losing quarterbacks Terry Wilson and Sawyer Smith to injury.

In 2020, the group will look not only can they block at a high level but reel in catches and help form a more balanced offensive attack.

While Lynn Bowden Jr and Ahmad Wagner are gone, there is still plenty of talent returning to the Wildcats wide receiver room in 2020. Here’s a look at all 17 wideouts on the UK roster.

Josh Ali (#6) throws the L’s down. Photo by Brandon Turner.

In a year that saw the Kentucky Wildcats rely heavily on the running game, Josh Ali was able to break through as Kentucky’s go-to wide receiver on passing plays.

Ali made 23 catches for 233 yards averaging 10.1 yards per reception while also hauling in three touchdown grabs. No touchdown stood out more than his 13-yard score in the final seconds of the Belk Bowl as he proved that when in need of a big play, he would rise to the occasion.

With Kentucky set to throw the ball much more in 2020, Ali will be Kentucky’s primary receiver and will look to break through and perhaps sneak onto NFL Draft boards for 2021.

Allen Dailey (#89) dives for a touchdown in Kentucky’s victory over Murray State. Photo by Brandon Turner

Allen Dailey is entering his third season with the Wildcats. Dailey played almost exclusively on special teams as he appeared in all 13 games as a true freshman in 2018, but he did record two receptions, including a 38-yard touchdown against Murray State.

In 2019, Dailey hauled in just seven passes for 75 yards but was perhaps Kentucky’s top run blocker among receivers for the SEC’s top rushing attack.

With the Wildcats set to throw the ball far more in 2020, Dailey will likely be a starter and see a significant increase in targets.

Clevan Thomas makes a catch in traffic vs. Tennessee Photo by Brandon Turner.

After two years of patience, Clevan Thomas Jr. finally began to see results of his hard work in 2019. Thomas played in eight games as a true freshman in 2017, making just one catch and in 2018 took a redshirt season after being held to just three games.

Last season, Thomas played in all 13 games, including making seven starts. In those games, he made 11 catches for 99 yards and grabbed his first collegiate touchdown against Arkansas in Bowden’s first game as quarterback.

In 2020, Thomas like his fellow receivers figures to get far more targets and opportunities to continue to breakthrough.

Bryce Oliver (#85) hauls in a touchdown pass vs Toledo. Photo by Brandon Turner.

After a breakout performance in the 2019 Spring Game, Bryce Oliver carried that momentum into his redshirt freshman season.

Oliver played in 12 games and made six catches for 111 yards, including a 32-yard touchdown grab in the season opener against Toledo and a 44-yard grab during Kentucky’s 29-7 home victory over Missouri.

In 2020, Oliver figures to fight for a starting job and perhaps fight Ali and Dailey to be the Wildcats go-to option in the passing game.

2019 was a lost season for Isaiah Epps as he missed the entire year with a foot injury. Thus, Epps picked up a redshirt season and looks to get back on the field in 2020, knowing he still has two years of college eligibility.

As a true freshman in 2017, Epps played in all 13 games making four catches for 55 yards. He followed that up with and eight catches, 76-yard season as a sophomore in 2018 again playing in all 13 of Kentucky’s games.

If healthy in 2020, the speedster will challenge the rest of the Kentucky wide receiver room for targets.

Akeem Hayes will look to breakthrough as a redshirt sophomore after a rough start to his college career.

Hayes was held to just one game in 2018 to maintain a redshirt season making one catch. In 2019, Hayes missed the first four games of the season due to an “academic issue.” He returned to play in eight games, making one catch for five yards at Vanderbilt and one rush for two yards against Arkansas.

With an opportunity to earn playing time, Hayes will look to get off to a stronger start on the field and in the classroom in 2020.

The redshirted will be ripped off DeMarcus Harris in 2020 after being held to just three games as a true freshman last season.

In those games, the Florida native did not make a catch but did record a tackle on special teams in the season opener against Toledo and appeared in UK’s wins over Eastern Michigan and U-T Martin. He will look for an increased special teams role and perhaps playing time at receiver.

Bluegrass native Tae Tae Crumes will look to make an impact on his home state Wildcats as a redshirt freshman.

Crumes was held to just one game in 2019, hauling in a catch. In High School, he hauled in 35 touchdowns and 2,021 receiving yards, was named to the 2018 Lexington Herald-Leader Class of the Commonwealth and was also tabbed an all-state honoree and all-Louisville metro performer and earned offers from programs such as Oregon and Michigan.

Kalil Branham is one of three wide receiver signees for the 2020 Wildcats but was the only one to enrolee early.

The Ohio native ran track and played basketball in addition to Football and chose to join the Wildcats over Michigan, Boston College, Cincinnati and others.

Louisville native Izayah Cummings will be sticking in the Bluegrass to play College Football for the Kentucky Wildcats.

Cummings grew up a Louisville Cardinals fan but told WHAS11 Kentucky recruited him far harder than the Cardinals leading him to head for Lexington.

Earnest Sanders had opportunities to play both college basketball and football and opted for the gridiron with the Kentucky Wildcats.

The Michigan native earned First-team all-state as a senior by The Associated Press and Detroit News in 2019 after catching 19 passes for 522 yards and seven touchdowns and in 2018 first-team also earned all-state honors when he caught 42 passes for 1,047 yards and 15 touchdowns.

While listed as a wide receiver, Brett Slusher has mainly been a special teams contributor for the Wildcats.

After redshirting in 2016, the Bluegrass native practiced with the team in 2017, played in 10 games in 2018 and in 2019 played in all 13 games recording four tackles and recovered a muffed punt against South Carolina.

Chance Martin enters his second year as a Kentucky Wildcat walk-on. As a Senior in High School in 2018, Martin Totaled 952 all-purpose yards and 15 touchdowns as a senior and had 43 tackles.

Last season he practiced with the Wildcats and will look to fight for a special teams role in 2020.

After three seasons playing Lacrosse at Rollins College, Wesley Johnson transferred to UK in June of 2019.

He did not appear in any games for UK last season but did practice with the team and will look to earn a special teams role in 2020.

Darren Edmond will be entering his third season with the Wildcats. The walk-on is originally from Norman, Oklahoma, but moved to Lexington to play his High School Football at Dunbar High School.

He arrived at UK in 2018 and practiced with the team and in 2019 made his college debut against U-T Martin.

Tyler Beisner will enter his third season as a walk-on with the Wildcats.

An owner of two bowl game rings, Beisner practiced with the Cats in both 2018 and 2019 and earned a spot on the SEC Fall Academic Honor Roll last year.

Manny Harper enters his third season with the Wildcats. In High School, he was named a 2017 Governor’s Scholar with a 4.2 GPA and held offers from Harvard and Dartmouth.

He has yet to make his college debut as a Junior as he has only practiced with the Cats since arriving in 2018.