Jerry Claiborne’s UK teams won 32 games in CWS, still the record for a UK coach…   Rodger Bird threw a 32-yard halfback pass to QB Rick Kestner for a score against Ole Miss, giving UK a 13-7 lead in the Wildcats’ 27-21 upset of the top-ranked Rebels in 1964 in Jackson…  Patrick Towles’s first collegiate TD pass came in 2012 against Mississippi State, when he connected from 32 yards out with WR LaRod King…  DB J.D. Harmon returned four kicks last season for an average of 32 yards (longest – 60 vs Louisiana-Lafayette in the season-opener)… 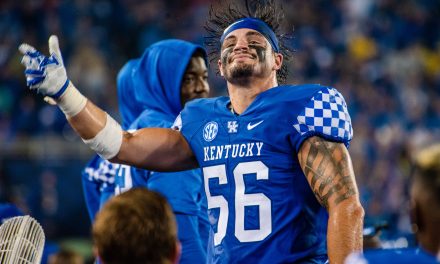 3
8
Big Blue Insider @bigblueinsider1
2 days ago
Tonight: @KYHuangs will peer through the raindrops and look ahead at UK vs South Carolina; @BenRobertsHL on the latest recruiting news + @BillyRsports & your calls at 280-2287 or tweet us. 6 pm on Newsradio 630 WLAP... https://t.co/zr6zusPa6Z
View on Twitter

4
10
Big Blue Insider @bigblueinsider1
3 days ago
One of the most under appreciated players in @KentuckyMBB history… https://t.co/wA7XVxDV7W
View on Twitter

Bradley McKee @Bradley_B_Roll
On this day in 1998, Keith Bogans of DeMatha Catholic of Maryland commits to Kentucky. Bogans played 4 years at UK and finished with 1,923 points. He won SEC POY and SEC Tournament MVP in 2003. #SchoolinSession https://t.co/XEagt8pKCh
6
287
Big Blue Insider @bigblueinsider1
3 days ago
Above and beyond… https://t.co/yXNIoUzfZB
View on Twitter