After receiving bowl bid, Stoops back on recruiting trail

Mark Stoops coached his team to an upset win over Louisville, came home and celebrated with the fans who had descended on Commonwealth Stadium, and then disappeared.

His whereabouts were no great mystery; he was back on the same recruiting trail that has yielded the players who elevated his program to the point where fans are dropping what they’re doing and heading out to celebrate a victory over their arch-rival.  And Stoops enjoyed it, but he knew he needed even more players. So he left town.

A few days later he was back and catching up on some personal errands.  On his way to the bank, he couldn’t help noticing how other drivers were honking their horns.

“Everybody starts beeping and waving and yelling at me, it was like, what’s going on, man?” Stoops said Monday.  “It was just another normal day for me.”

Maybe for you, but not for these football fans. They’re all happy.   Kentucky is going to a bowl game.

These are people who haven’t had the option of buying a bowl game ticket in six years and even then, in 2010, your hard-earned money would have landed you a seat at the Compass Bowl.  Sure, it was at historic Legion Field, the very stadium where Bear Bryant and Shug Jordan used to exchange nasty glares.  But it was in a part of Birmingham that, sadly, resembles a war zone these days.

The Cats will play in the sun.  At least, that’s what you would expect from a city where the weather on New Year’s Eve usually ranges from 46 to 63 degrees.  And you would think tickets would fly off the shelves to fans who actually began to complain a few years back about multiple trips to the Music City Bowl.

Of course, that was before bowl games disappeared from the UK football landscape. But now, thanks to a remarkable turnaround, the Wildcats have returned to the post-season.  They get to hang around with all the other college football cool kids.

Being shut out of the bowl schedule, while all your other SEC pals get to play on national TV during the holidays, is like being relegated to the kids’ table on Easter Sunday.  Yeah, you’re at the dinner but all you can do is watch the grown-ups eat and plan on the day you’ll actually get to pull up a chair.

Kentucky is front and center now, with a napkin tied around its neck, ready to dig in to all that bowl goodness: National exposure… extra practices… validation with recruits – those who have committed and some who may still be on the fence.

“We had 16 kids in this weekend, and that went very well,” Stoops said.  They all got seats in Rupp Arena, where they experienced first-hand the full-throated roar of the Big Blue Nation.  They also saw the coach who covets their services joining his newly-minted bowl team on the floor at halftime, soaking up a rousing ovation.

“They’ve worked hard. You guys know that,” Stoops said. “They’re a good group, so it was fun.”

And now it’s back to work, lifting and running and taking final exams.  Stoops and his assistants will be back out recruiting, looking for another class that might help propel Kentucky into an even bigger bowl game.  The Wildcats at one point were linked to five different slots.

They would have agreed to anything, after the late-season flameouts each of the last two years.  The Nation, of course, would have accepted Nashville (grudgingly) and maybe Charlotte, but didn’t seem to want any part of Memphis or Shreveport.  They wanted the sun.

And they got it, thanks to the job turned in by the Mark Stoops, his players and his staff.  So if you see him in traffic, honk your horn. 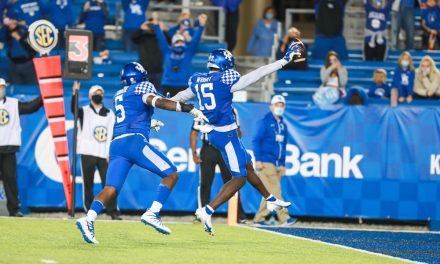