LEXINGTON, Ky. – Kentucky scored 13 runs in the sixth and seventh innings on its way to a 16-3 victory over Miami (Ohio) on a sunny afternoon at Cliff Hagan Stadium. The win extended the Wildcats’ home winning streak to eight to start the season, during which they have outscored opponents 83-14.

The Cats (10-6) broke the game open by keeping the line moving in the sixth, scoring seven runs as eight consecutive batters reached base safely. Senior outfielder Zach Reks highlighted the rally with a two-run single to right field, giving him nine RBI in four games on the week. An inning later UK added six more runs to record its fifth game with at least 15 runs scored.

The game was tight through the top of the sixth, with senior first baseman Gunnar McNeill’s first home run of the season, a two-run shot off the scoreboard, providing the difference as the Cats led 3-2. In the sixth the Cats used three walks and five singles in succession to pull away to an easy win.

It was a balanced attack for the Cats, which had 12 players score a run, 10 record hits and nine drive in a run. Marcus Carson counted a double among his three hits and Luke Heyer had his eighth extra-base hit among his 10 hits on the season.

Zach Logue earned his third consecutive victory with 6.0 innings of five-hit, two-run baseball. The junior lefty struck out a season-high six and limited the damage when the Redhawks were able to put men on base while the outcome was still in doubt. Alec Maley, Austin Keen, Chris Machamer and Jake Hamilton took care of the final three innings.

Bottom 4th – Troy Squires’ base running brought home the game’s first run after he took off for second with Luke Heyer on third, drawing a throw that glanced off the second baseman’s glove and into CF, scoring Heyer. Gunnar McNeill then smoked a two-run homer off the scoreboard in LCF. UK 3, Miami 0.

Top 6th – Ross Haffey reached on an error to lead off the inning and advanced to third on Adam Yacek’s double just inside the 3B bag. Brooks Urich drove home Haffey on an RBI groundout to 2B. UK 3, Miami 2.

o   The six strikeouts are a new season-high, topping the five he had against North Carolina on 2/18.

o   Reks has nine RBI in four games this week and 13 on the season.

Kentucky will attempt to sweep its final non-conference weekend series on Sunday. First pitch is slated for 1 p.m. Fans can listen on the UK Sports Network via UKathletics.com and iHeart Radio or 98.5 FM in the Lexington area. The game also will be aired on SECN+ via WatchESPN.

May 25th podcast with Kyle Tucker and Robert O’Neill 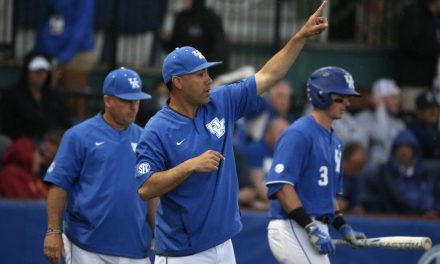