When the basketball season begins, virtually every UK fan knows the site of that year’s Final Four.  They constantly re-evaluate their team’s chances at getting there, with a real shot at a national championship.

If the football team is showing signs of life, the calculations begin: Can they get enough wins to get to a bowl game at a warm weather site? The upset victory over Louisville last November proved to be a gateway to Jacksonville, and the TaxSlayer Bowl.

In college baseball, it’s different. And it’s simple. All you care about is one word: Omaha.

No, not the Peyton Manning version, which for all we know was misdirection barked at the Broncos’ line of scrimmage. It’s just the opposite. All roads in college baseball lead directly to the biggest city in Nebraska, and the Kentucky Wildcats are openly talking about getting there.

The subject came up again Tuesday night and while some head coaches might recoil in horror at the thought of looking that far ahead, UK’s first-year head coach, Nick Mingione, wants them to embrace it.  And they are.

Why 78? The regular season runs 56 games.  The additional 22 would include the SEC Tournament, a regional championship, a victory in a super regional and then the College World Series, in the Cornhusker State.

A long, long shot at the start of the season, UK’s chances have been getting better and better as the Cats have climbed in the national polls.  Jumping out to an 11-0 lead over a quality team like Louisville (turning a triple play in the process) en route to a 11-7 win will turn some heads.

Suddenly, the college baseball world is peering a bit more closely at Lexington, Ky., wondering what is happening with a program that has won exactly one SEC championship in its history, in 2006.  Sure, UK managed to climb to the top of the polls in 2012, but it couldn’t quite parlay its talent that year beyond the regional tournament level.

So what’s the difference? Why has this year’s team, winner already of four conference series (including two on the road, one a sweep) done what seems like a complete about-face? As you’d expect, there’s more than one reason.

The new coaching staff is a huge key.  Former head coach Gary Henderson was a master at developing pitchers and constructing bullpens.  But when chief recruiter Brad Bohannon took his talents to Auburn, things began to erode.  Henderson realized he needed a break and stepped down (landing on his feet at powerhouse Mississippi State, where he is now the pitching coach).

Mingione swept into town with a burst of positivity and enthusiasm, preferring after mistakes or losses to accentuate the good things that need to happen next, and how to achieve them.  He’s daring his team to think big.  His assistant coaches are in lockstep with their new boss and it’s helped land them atop the SEC East midway through the season.

Mingione and pitching coach Jimmy Belanger moved two freshman All-America relievers, Sean Hjelle and Justin Lewis, from the bullpen to the starting weekend rotation, where they’ve been joined by sometime mid-week starter, sometime reliever Zach Logue.  All three have proven they can win as SEC starters, with help from leftie Logan Salow, who’s become one of the league’s top closers.

But one of the biggest areas of improvement has come, believe it or not, at the bottom of the batting order.  “We have a running joke. We call it ‘Murderer’s Row’ down there,” catcher Troy Squires said after the win over Louisville. “If you’re (batting) six through nine, you’re in ‘Murderer’s Row.’ “

Troy Squires who, like Heady, is having his best season offensively, applies the tag at the plate before firing to third to complete the triple play (WKYT)

Squires and his teammates who bat in those slots will never be confused for the ’27 Yankees of Ruth and Gehrig.  But they’ve proven to be splendid table setters for the bats at the top of the order.

“The guys at the top, they’ve proven they can do it year after year,” said Heady, who usually bats ninth but is hitting a career high .271. “We just talk about grinding out at-bats, seeing the pitcher well, getting on base for the guys at the top.”

Squires, a redshirt junior in his first season as UK’s regular catcher, is hitting a career-best .274.  “We know the top of the lineup is one of the best in the nation, if not the best,” he said. “We know if we grind out a quality at-bat, we’ll be good.”

In Tuesday’s win over Louisville, the bottom four slots in the UK lineup ground their way to five hits, six runs and six RBIs.  Opposing pitchers have little chance to relax against any portion of the Kentucky lineup.

“We hope they relax, and then we hope we make ‘em pay,” said Squires. “That’s our approach.”

Heady, who had exactly two home runs coming into this season throughout a career riddled with injuries, has been healthy from Opening Day – and his cracked six homers, proving you can’t even relax against the guy in UK’s nine hole. There are no easy outs.

“It’s not that way with the Cats,” he said. “It is with some teams. You get down to the bottom of the order… they can still get guys out. With the Cats, those guys hitting in front of me, they’re tough outs. They just grind. They’re really good players.”

Good enough at least to think about Omaha. And not the Peyton Manning “Omaha,” either. 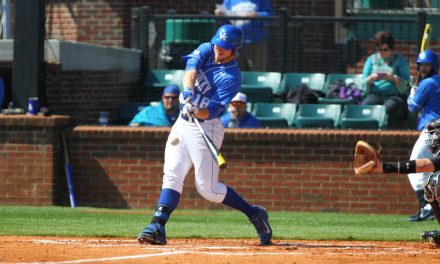 Mahan named SEC Player of the Week for 3rd time

Big Blue Insider @bigblueinsider1
9 hours ago
Vacation time so it's the Best Of the BBI. Tonight: @FredMaggard606, @EKUWWells & @KYHuangs talking lots of college football. And some basketball. 6pm @630WLAP https://t.co/uhXYJ39wo2
View on Twitter