The worst beat the first in the SEC East and ruined the weekend at Cliff Hagan Stadium as the Georgia Bulldogs, 5-16 coming into the three-game series with Kentucky, took the rubber game Sunday with a 6-3 win.

A tough hill just got a lot steeper.

Now, in order to at least have a chance at a Southeastern Conference championship, the Wildcats will at least have to win both of their next two series, at home this coming weekend with Tennessee and the following weekend at Florida.

A sweep somewhere in there would be nice but the Vols, like the Dawgs, will be playing for their SEC Tournament lives. Only the bottom two teams are not invited to Hoover. Alabama looks like it will miss the tournament just outside of Birmingham. Tennessee and Georgia are hoping to avoid being the last team standing when the music stops.

And the Gators themselves are in contention for the league championship, now that they’re alone at the top of the East after their series win over Mississippi.

Losing this series was the last thing the Wildcats expected, even though head coach Nick Mingione had warned that the Bulldogs would be ultra-competitive before the series began and reminded listeners after the loss on Sunday. “What have they lost, 16 one-run games?” he asked.

It looked as though it might have been 17, after Riley Mahan’s 10th home run made it 2-1 Wildcats after seven innings and then relief specialist Logan Salow took the mound.

But Georgia answered with five runs in the top of the 8th, four coming on a grand slam by Tucker Webb.

“Their whole lineup did a really good job, spitting on balls down in the dirt and they made me bring it up into the zone,” said Salow, who missed a chance at his ninth save by absorbing the loss, his second of the weekend. Salow was on the mound Friday night when the Cats blew a lead with two ninth-inning errors in a 5-3 loss. 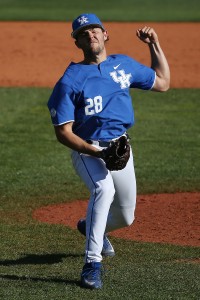 “I think we’re going to be all right,” he said. “We’re a veteran team and we have a lot of older guys that don’t like losing. It starts tomorrow. You can dwell on it tonight but it has to be out of your head by tomorrow. “

It’s a veteran team that was in the middle of the SEC race at the midway point last season, but fell apart. They don’t want to go through that mess again.

“You’ve gotta flush it,” Lewis said. “It’s just one of those games. It hurts but you can’t dwell on it. You have to move on to the next game and the next series.”

None of the comments surprised the head coach.

“I don’t worry about that with this team,” Mingione said. “That’s one of the strengths of our team. We don’t let things linger.”

They can’t afford to. Despite the disappointing weekend, Kentucky is still in the chase for an SEC championship.

“This one hurts. It hurts a lot but we want a ring,” Salow said. “That’s what we’re here for. That’s what we came to do. We’re just going to have to lock in and come together as a team again and get this thing done.”

Kentucky is zoning in