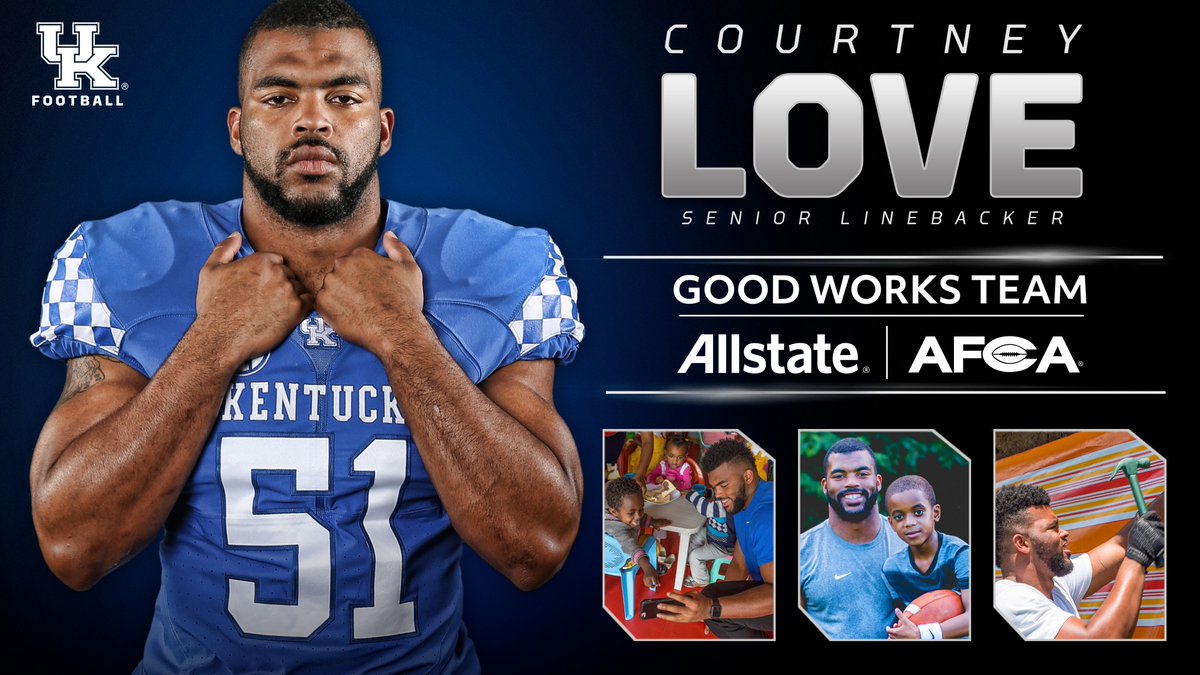 LEXINGTON, Ky. – Kentucky football linebacker Courtney Love has been named to the 2017 Allstate Good Works Team selected by the Allstate Insurance Company and the American Football Coaches Association, it was announced today.

Love is one of 22 college football players overall and one of just 11 Football Bowl Subdivision players named to the prestigious team. This award shines a spotlight on the incredible stories of selflessness and community service displayed by these student-athletes and honorary head coach, and honors their dedication to volunteerism and enriching the lives of others.

Love, a native of Youngstown, Ohio, shows his selflessness by volunteering his time to help others. He leads the team in community service hours and has a passion for mentoring children, especially those living in a one-parent household or children who have parents who are incarcerated. His passion for helping others was derived from his own childhood experiences. At the age of eight, Love ran away from a not-so-healthy relationship with his mother, and as a teenager, was forced to deal with his father being incarcerated for two years. Because of his past, it was a perfect pairing when he found Amachi Central Kentucky. Amachi is a mentoring program that seeks to pair caring, positive adults with children and youth in the Bluegrass who have one or both parents in state or federal prison or are affected by incarceration in some way.

“Since Courtney began mentoring through Amachi, he has exhibited compassion, kindness, leadership, and love,” Amachi specialist Destini Engle said. “Working with him is one of the greatest honors of my life. He has changed and will continue to change so many lives through his story and his mentorship.  I cannot think of a more deserving individual for this award.”

Love also has served in a Skype mentoring program with area high school students, and has taken part in many events with the UK Children’s Hospital, Read Across America, and Special Olympics, along with many other service activities.

In May of 2016, Love was chosen to participate in a service/educational trip to Ethiopia where he helped build houses as well as shoe-shining boxes for men to be able to work and provide for their families. He also delivered food to impoverished families and visited with orphans and widows.

Love, who was named to the 2016 SEC Community Service Team, has also been nominated for several other national awards, including the Lott IMPACT Trophy, the Wuerffel Trophy and the Senior CLASS Award just to name a few.

“I’m so proud of Courtney,” UK head coach Mark Stoops said. “He exemplifies everything you’re looking for in a student-athlete. The fact he’s being recognized on a national level doesn’t surprise me because of the way he serves other people. “

In the classroom, Love was named to the 2016 SEC Academic Honor Roll, graduating in May with a degree in community and leadership development. He is currently working on a second degree in communications. He also serves as one of UK football’s Student-Athlete Advisory Committee (SAAC) representatives for the second straight season.

Love is the 14th player at UK, including the third under Stoops, to be named to the team in the award’s 26-year history. UK ranks tied for second all-time with Nebraska in award winners behind Georgia (17).

Tebow and the rest of the voting panel were faced with a list of 146 nominees with robust community service resumes that was narrowed down to the 22 student-athletes and an honorary coach named to the team. From helping to build homes overseas to providing resources to foster care children, the members of the 2017 Good Works Team® are changing the lives of others both locally and abroad.

The 2017 Allstate AFCA Good Works Team® will be invited to New Orleans to participate in a special community service project ahead of the 2018 Allstate® Sugar Bowl®, where the entire team will also be recognized on the field at halftime.

In addition, Allstate will honor Good Works Team® players by creating special volunteer events in select markets throughout the season in conjunction with its All Hands In program, which encourages the college football community to come together and do good.

The following players and honorary head coach have been named to the 2017 Allstate AFCA Good Works Team®:

Patrick Mohorcic – The College of Wooster

“The 2017 Allstate AFCA Good Works Team is a shining example of the great student-athletes that populate the rosters of college football teams all across the nation,” AFCA Executive Director Todd Berry said. “Since 2008, the AFCA takes great pride in working with Allstate to honor these 22 outstanding student-athletes, and honorary head coach Pat Fitzgerald, who go above and beyond to make their universities and communities a better place.”

Fans are encouraged to visit ESPN.com/Allstate to vote for the 2017 Allstate AFCA Good Works Team® Captain now through November 23, 2017. The Team Captain will be honored at this season’s The Home Depot College Football Awards on ESPN.

Throughout the season, fans can also follow along and join in on the conversation by searching and using #GoodWorksTeam on their social media channels.

About Allstate
The Allstate Corporation (NYSE: ALL) is the nation’s largest publicly held personal lines insurer, protecting approximately 16 million households from life’s uncertainties through auto, home, life and other insurance offered through its Allstate, Esurance, Encompass and Answer Financial brand names. Other growth platforms include predictive analytics company Arity and consumer-product protection plan company SquareTrade. Allstate is widely known through the slogan “You’re In Good Hands With Allstate®.” Allstate agencies are in virtually every local community in America. In 2016, The Allstate Foundation, Allstate, its employees and agency owners gave $42 million to support local communities.

About the Allstate AFCA Good Works Team®
The Allstate AFCA Good Works Team® was established in 1992 by the College Football Association, recognizing the extra efforts made by college football players and student support staff off the field.  AFCA became the governing body of the award in 1997 and continues to honor college football players who go the extra mile for those in need.  Allstate worked to present the award starting with the 2008 season.

About AFCA
The AFCA was founded in 1922 and currently has more than 11,000 members around the world ranging from the high school level to the professional ranks. According to its constitution, the AFCA was formed, in part, to “maintain the highest possible standards in football and in the coaching profession” and to “provide a forum for the discussion and study of all matters pertaining to football.”

Offensive coaches and players after practice