A tale of two point guards

In football (it is still football season after all) there is a saying, “If you have two quarterbacks you have none.” That isn’t true in basketball having two point guards can be a valuable asset, especially if those two guys can also be on the floor at the same time. Kentucky has had pairs of talented lead in the past; John Wall and Eric Bleadson, Andrew Harrison and Tyler Ulis, Tyler Ulis and Jamal Murray. It appears that they will have another set this year with Shai Gilgeous-Alexander and Quade Green.

Green came to Lexington with a slightly more impressive resume, he was both a McDonald’s All American and played in the Jordan Brand Classic.

Once everyone was on campus it seemed anytime a player was asked, “Who impressed in pick up games?” Shai Gilgeous-Alexander was the first name out of their mouthes.

Tonight in an exhibition game against a division one opponent, Morehead State, the pair of point guards showed why they both got praise in different ways.

Kentucky defeated Morehead State 92-63 in front of a crowd of 14,138 who bought tickets to raise money for team Team Rubicon, a charity currently active in Florida and Puerto Rico. The event raised $448,200 in ticket revenue.

Morehead State Coach Preston Spradlin was asked about Quade Green and he seemed impressed as he read over his stat line, “I mean what did he have tonight, 5 assists, 1 turnover, 20 points. He’s good, he’s good.”

John Calipari thinks Green can still improve but was impressed with his performance, “I thought that Quade, that’s the best he’s played. I still got to get him to get rid of the ball. He just wants to hold that thing. But when he gets rid of it, it comes back to him and he scores. Because he can do it. And the second thing that happens when he gets rid of it, he’s in a position that they have to space the court and play him, because he can shoot that three.”

One of the perceived defefecincies on this Kentucky team is shooting. If Green can make the outside shot he will be a very valuable asset. Gilgeous-Alexander agreed with Calipari on Green’s shooting ability. Gilgeous-Alexander described the differences between Green and himself, “He’s more of a shot making point guard than I am.”

Kevin Knox and Shai Gilgeous-Alexander team up on a block.
Photo By Barry Westerman | UK Athletics

The most obvious difference between Green and Gilgeous-Alexander is their size. Green is 6ft with a 6’2.5″ wingspan, Gilgeous-Alexander is 6’6″ with a 7ft wingspan. Gilgeous-Alexander can use that length on defense to give opponents fits. Calipari mentioned, “Shai’s energy and his ability to deflect balls” in the post game press conference. That seems to be a common theme in the early action for Kentucky.

This is how backcourt mate Hamidou Diallo described Gilgeous-Alexander, “very long, very creative and he has a motor, the kid has a motor. I mean he’s been defending, getting deflections and he’s just been giving it his all on the floor.”

Green and Gilgeous-Alexander have different strengths but those strengths are very complementary. Green’s shooting and Gilgeous-Alexander’s defense will make it tough for opponents to prepare for UK’s point guard position. And these two will be under the tutelage of a staff that has helped put several lead guards in the NBA. Spradlin summed it up nicely, “They kind of know what they are doing with point guards here.” 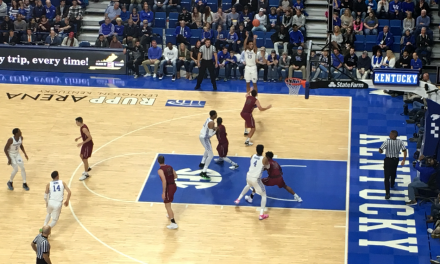