Kentucky is zoning in

John Calipari doesn’t like to play zone. He has made that very clear many times since he has been the coach at Kentucky. Even the urging of former UK Coach Joe B. Hall  to play a 1-3-1 hasn’t swayed Calipari’s philosophy too much. However, tonight in Kentucky’s 106-63 exhibition win over Centre College, Calipari played zone, even though his team had not devoted much practice time to it, “I mean, we haven’t played zone in a week in even practice. So we went to it and I told Coach (Tony) Barbee, just talk to them and we’ll, let’s see what that big lineup looks like when we’re playing. And I tell you, we got our hands on a lot of balls, we, you’re really that long, it’s pretty good stuff.” 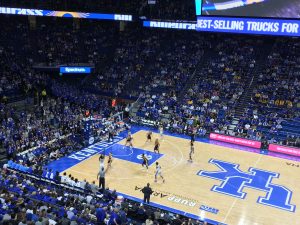 Wenyen Gabriel hits an outside shot. Photo by Curtis Burch

Part of the reason Calipari doesn’t play zone is because it gives up open three’s, “I did play the zone just so we could look at it for a minute. But, again, gave up some threes, but it disrupted the game, which is why you go to it.”

Kentucky’s length is what causes the disruption. At one point Kentucky had a line up on the floor consisting of Shai Gilgeous-Alexander, Kevin Knox, PJ Washington, Wenyen Gabriel and Sacha Killeya-Jones. Those players’ wing spans are 7’0″, 7’0.25″, 7’3″, 6’11” and 7’2″ respectively. That is a TON of length. When Killeya-Jones was asked about the line up’s reach he called it “scary.” Length, obviously, makes a zone better.

Killeya-Jones likes what he sees from the zone calling it “promising” and saying, “I think we have a lot of potential to be a good zone team because we have so much length and so many athletes and so many good rebounds.”

Nick Richards has a similar mindset to his coach when it comes to the zone, “I don’t really like playing zone, but it is what we’re working on right now, hopefully it is something we will use later on in the season.”

Kentucky’s “veteran” sophomore Wenyen Gabriel sees tonight as a starting point for the zone, “I think we can defiantly build on that, we throw that out there every now and then. I don’t think that’s going to be our main defense ever, but I think it is something good to have in our arsenal.”

On the flip side, one of Kentucky’s perceived weaknesses is outside shooting so opponents might go to a zone to stop UK’s penetration. Tonight’s box score indicates that won’t work. The Wildcats shot 57.1% from behind the 3 point line. Quade Green went 3-3 and Wenyen Gabriel went 3-4. Calipari even kind of complimented his team’s shooting, specifically Gabriel, “I thought Wenyen did some good stuff, shot some balls. We shot the ball fairly well.”

Gabriel credits offseason work for him improved shooting, “I think I’m just more prepared this year. I know when I’m going to be open and be ready for my shot. I’ve always been a good shooter I just got to be more ready for my shot.”

Kentucky doesn’t need to shoot like the Golden State Warriors to stop teams from playing zone, they just have to keep opponents honest.  And they don’t need to turn into Syracuse and exclusively play zone on defense.Kentucky should use a zone from time to time to throw off opponents offense. A zone with UK’s length is a valuable weapon Calipari needs to use this season.

May 4th podcast with Billy Reed and TJ Beisner

Big Blue Insider @bigblueinsider1
33 minutes ago
MCCall told us pre-season he was in shape, ready to lead and anxious to make plays. At SC, he was a beast. We wanted him for Player of the Game interview but he was completely spent - getting an IV in the trainer’s room… https://t.co/VVojftFUt6
View on Twitter