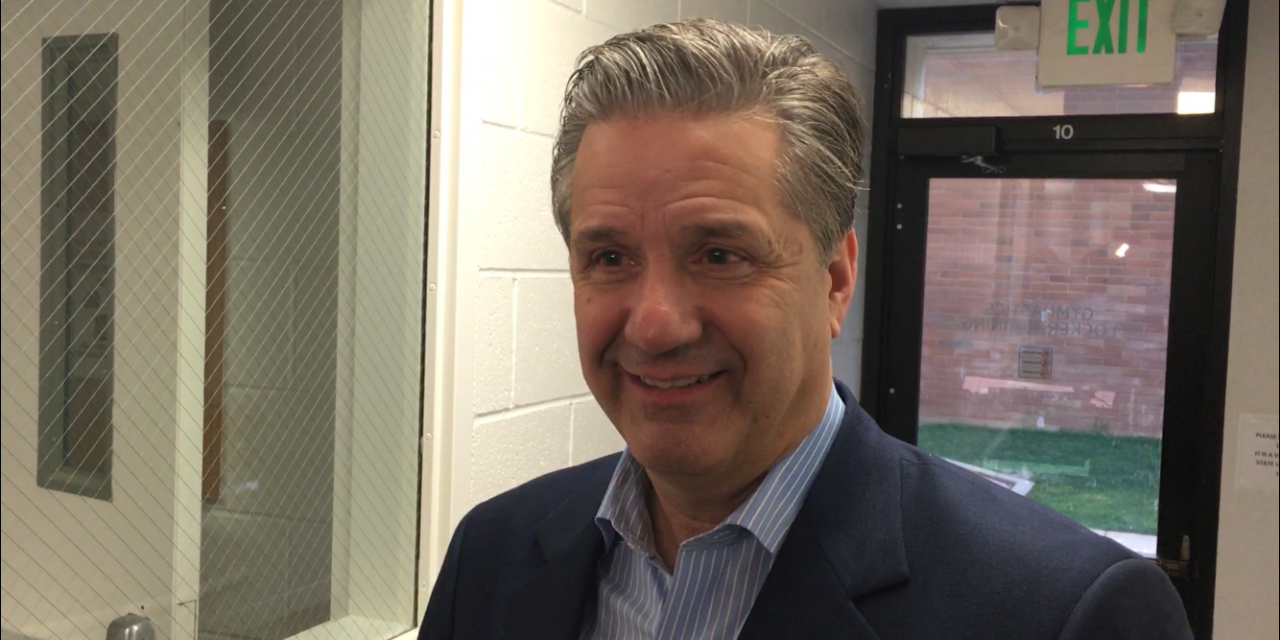 Boise, Idaho – Kentucky Coach John Calipari spoke at the podium then again in the UK locker room to a small group of media. Hear everything he had to say after Kentucky’s 95-75 win over Buffalo to advance to the sweet 16 in Atlanta (he seemed to be in a good mood).

Transcript from the podium

JOHN CALIPARI opening statement: My comment to the players after the game was the reason this has been the most rewarding season I’ve had in over 30, or however many I’ve done this, is because of what’s happening for Wenyen, what’s happening for Hami. You saw what he is and what he’s capable of today. Let me say this, you may say that — I was trying to learn about him and he was trying to learn about me. We were trying to figure this out. Everybody said, Why are you starting him? Because he deserves it, I love him, and he’s going to do it. It just took us a long time.

Wenyen, the same. He had to conquer himself. When you’re not playing well you have to kick out of it and go.

And Shai, I didn’t really enjoy coaching Shai, but he’s a good kid, I guess (laughter).

Q. Obviously the freshman thing gets played and played and played.
JOHN CALIPARI: And I whine. Coach and I talked about it before the game, Nate and I talked. There’s nothing there. He’s a great guy and a heck of a coach now. What he’s done and how that team plays and what they’ve done in their league, amazing. It’s amazing.

Q. But what I wanted to ask you was — (laughter) — sorry. Obviously today was a game with a ton of peril and the other night was a game that had all kinds of things that could have happened. Would you say your kids might have graduated to the next class now? Are they beyond your regular freshmen?
JOHN CALIPARI: There will still be experiences in this tournament as we go forward that they’ve never faced and I have to try to talk them through it. I told them at halftime Buffalo is going to make a run. They may tie the game up. So what, just keep playing. They made their run and got it to six, they may have made it to four. I said, This is what happens in this stuff, you’ve got to keep playing.

I think, again, we are inexperienced and all that stuff. But I’ve got good players, and my challenge was they had to establish themselves first. Hami is still figuring it out.

Second thing is, they had to change how they thought about training and working and preparation. I talked to them today. We had a great shoot-around today. And I said, the beginning of the year — Sean Farnham watched this in South Carolina, and he said that was the worst shoot-arounds that I’ve ever seen one of your teams have. We had guys laughing and joking, and I had to stop and scream. It was an hour and 10 minutes. My shoot-arounds are 40 minutes, 42, 45 minutes.

Today they were good. It takes my team a year to really learn how important it is to use the entire day to prepare for a game. It’s rewarding to see individuals do what they’re doing. But it’s also rewarding to get them to understand they need each other, because this is a team sport.

And I said this before, Pat Riley said to me, one of the best compliments: Your players are all good teammates in this league. They come in this league and they understand. They share.

And you’re right, they’ve all had to give up something, and I held them back. You ask DeMarcus or Anthony, ask Devin, he’s still mad I didn’t start him. Am I going to start now? Devin Booker had 78 in a NBA game and I didn’t start them. Eric Bledsoe, You held me out. You’re doing all right. I said, Will you buy dinner?

Q. You’ve come a long way with these young men. You decide now going into the next round if you can name one thing, just one thing that you would like to instill in them as a team or as individuals for the next round, what would it be?
JOHN CALIPARI: Well, let me take that back, I need — Nick is the only one that isn’t breaking through right now. For him personally, I want to see Nick Richards step up and dunk and block and play. He’s kind of holding himself back right now. And I start him just like I did Hami every day, because I want him to break through.

We’re getting closer, but that’s probably the one thing I hope.

Q. Shai has the early morning sessions. Do you see any MKG at all in his habits?
JOHN CALIPARI: Michael Kidd-Gilchrist had the morning breakfast club. This kid goes at 7 a.m. But he also watches tape. He’ll go up and show me turnovers, show me what you want. What he was missing was any kind of skip, he couldn’t see it. And so you’ve got to keep showing them. Then when he does it you have to reward him. Now you see him come down and throw skip passes. But it took two months.

And he has a spirit about him, a smile. Every Canadian kid — I don’t know why I don’t get every Canadian kid, Jamal Murray, Trey, Michael, they all like have smiles, and they have — when Jamal would come and practice he’d look at me and go, Coach. Like, I wasn’t smiling. Smile. And so his spirit starts moving us that way. He was the one guy that was having fun. The other guys on this team two months ago, everything was a struggle. This kid was just smiling and laughing.

I kept bringing it up, Be like him. Happy-go-lucky. But he’s working. On time for everything. Never late for anything. Goes to class, does all that he’s supposed to do. And look at him, he’s playing himself into being one of the best players in the country.

Q. Very efficient today, 7 of 15. Seemed like every time UB put a little bit of run on you, one of your guys would come up and hit a big 3. How big was that?
JOHN CALIPARI: The last 10 games we’re shooting 40 percent from the 3-point line. Against Davidson we only took six. And I’m still trying to figure out, how did we only take six? Was it their defense? Was it what we did? Was it that we were trying to be aggressive? I don’t know.

We’re not relying on 3s, but we shoot 40 percent. It’s a different — I mean, some guys are going to shoot 30 and that’s how they coach and that’s great. It’s not what I do.

Kentucky Baseball @UKBaseball
Incredibly proud of what this TEAM did in Hoover. https://t.co/ieLfgECO5e
0
8
Big Blue Insider @bigblueinsider1
7 hours ago
One of the worst loudmouths in a youth league I once worked later had to be pressed into service as an ump. Eventually apologized to me and my partner. They have no idea… https://t.co/siLq88V2xE
View on Twitter
1
10
Big Blue Insider @bigblueinsider1
8 hours ago
Sadly, you had to sit through Ky games on SEC Plus with Doug Flynn and that other guy https://t.co/4GPBXeNcFs
View on Twitter
1
12