Monday morning, Team USA announced the 44 finalists that will have a chance to earn a spot on the official 12-member 2020 U.S Men’s Basketball Olympic team roster.

Davis is the only one of the three to have participated in the Olympics before. Before ever playing an NBA game, Davis represented the U.S. at the 2012 Olympics in London, where the team took home gold medal honors. While Davis played in the 2014 Basketball World Cup, he did not participate in the 2016 summer Olympics.

Adebayo is having a breakout season in his third year with the Miami Heat. The former Wildcat center will play in his first NBA all-star game next week as he’s averaging 16 points per game with 10.4 rebounds and 4.9 assists.

Finally, Booker has had another tremendous season with the Phoenix Suns as he’s averaging 26.7 points per game with 6.3 assists and 4.3 rebounds. Only 23-years old, Booker already earned a five-year, $158 million contract extension that he signed before the 2018-19 season.

This trio will look to join a long list of former Wildcats to represent Team USA in the Summer Olympics. Among those too, so include DeMarcus Cousins, Tayshaun Prince and Sam Bowie.

The final roster will be revealed later this year. 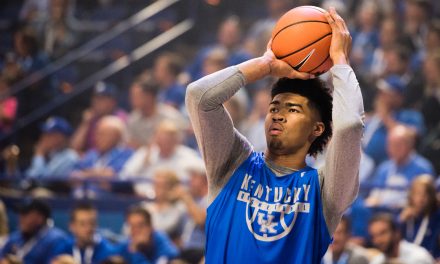 Kentucky Baseball @UKBaseball
Incredibly proud of what this TEAM did in Hoover. https://t.co/ieLfgECO5e
0
7
Big Blue Insider @bigblueinsider1
7 hours ago
One of the worst loudmouths in a youth league I once worked later had to be pressed into service as an ump. Eventually apologized to me and my partner. They have no idea… https://t.co/siLq88V2xE
View on Twitter
1
10
Big Blue Insider @bigblueinsider1
8 hours ago
Sadly, you had to sit through Ky games on SEC Plus with Doug Flynn and that other guy https://t.co/4GPBXeNcFs
View on Twitter
1
12