The Kentucky Wildcats dropped a third straight game to the University of North Carolina Wilmington with a 7-4 loss Sunday as the Seahawks finished off a stunning three-game sweep at Kentucky Proud Park.

After a quiet first inning, UNCW struck first blood in the top of the second. With two on and nobody out, Tyler Marsh ripped a two-run double. Later in the inning, Brooks Baldwin and Matt Suggs hit one-run singles to knock Kentucky starter Zack Lee out of the game. With Alex Degen on the mound for Kentucky, UNCW tacked on another as Cole Weiss laid down a sacrifice bunt to score Zachary Bridges and put the Seahawks on top 5-0.

In the bottom of the third, Kentucky’s offense broke through for the first time all weekend. With a runner on first, Austin Schultz delivered a two-run home run to left field to cut the UNCW lead to 5-2. On the very next pitch, TJ Collett slugged a solo shot to right to put UK within two.

UNCW would get a run back in the top of the sixth as Baldwin delivered his second RBI single of the game to extend the Seahawks lead to 6-3.

Kentucky would cut the lead back to two in the bottom half of the inning as John Rhodes singled home Jaren Shelby, who had stolen both second and third base.

With the lead 6-4, UNCW tacked on another run in the top of the seventh as Kip Brandenburg slugged a solo home run over the left field bullpen to extend the Seahawks lead to 7-4.

Up three, Seahawks relievers Breydan Gorham and Blake Deatherage shut down the Kentucky bats in the final four innings to finish off the series sweep.

With the loss, Kentucky (5-6) was swept by a non-Power Five program for the first time since 1999 (Florida Atlantic).

The Cats will look to get their season back on track Tuesday when they host the Cincinnati Bearcats. 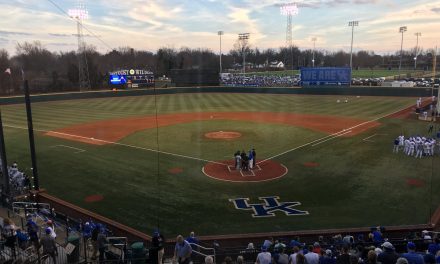