Best Kentucky Wildcats to Wear No. 3

It’s May 3 and that means it’s time to look at three of the greatest Kentucky Wildcats to dawn the No. 3 on their uniform.

Here we find two football stars enshrined in the UK Athletics Hall of Fame and a Kentucky Men’s Basketball Hall of Famer.

Owensboro, Kentucky native Rex Chapman, is perhaps one of the most popular players ever to take the Rupp Arena floor. Chapman earned both first-team All-SEC and All-SEC Freshman Team honors during the 1986-87 season after averaging 16 points per game with 3.5 assists and 2.2 rebounds.

As a sophomore in 1988, he averaged 19 points per game with 3.6 assists to earn third-team All-American honors and All-SEC first-team honors. Chapman was named the SEC Tournament MVP after the Cats took down LSU to win the 1988 SEC Tournament.

Chapman was drafted eighth overall in the 1988 NBA Draft by the Charlotte Hornets and went onto finish his 12-year NBA career with the Washington Bullets, Miami Heat and Phoenix Suns. He was inducted into the UK Athletics Hall of Fame in 2013.

Nearly no wide receiver in the history of UK Football had a better college career than Craig Yeast. In four seasons, Yeast broke program records in receptions (208), receiving yards (2,899) and receiving touchdowns (28).

No season was better than the one he put together in 1988. With Tim Couch as his quarterback, Yeast made 85 catches for a single-season program record of 1,311 yards and 14 touchdowns. In a victory over Vanderbilt, Yeast set a program single-season record with 16 catches for 269 yards.

He is one of just three Wildcats to make four touchdown catches in a game as he did so in 1997 against Indiana. Yeast was inducted into the UK Athletics Hall of Fame in 2006. He is now the head football coach at Kentucky Wesleyan.

Our final No. 3 is one of the winningest quarterbacks in UK Football history. Andrew Woodson is a two-time Music City Bowl MVP (2006 & 2007) and led the Wildcats to some of their most improbable wins in program history.

Woodson threw for 9,360 yards in four seasons as the UK quarterback which ranks second in program history. His 79 passing touchdowns is a program record. In 2007, he set the programs single-season record with 40 touchdown passes and threw for 3,709, which ranks third. That season, he led the Wildcats to a three-overtime victory over No. 1 and the eventual national champion LSU Tigers. He also guided the Cats by No. 9 Louisville and helped bring College Gameday to town ahead of the Cats matchup with the Florida Gators.

He was drafted in the sixth round of the 2008 NFL Draft by the New York Giants and was inducted into the UK Athletics Hall of Fame in 2019. 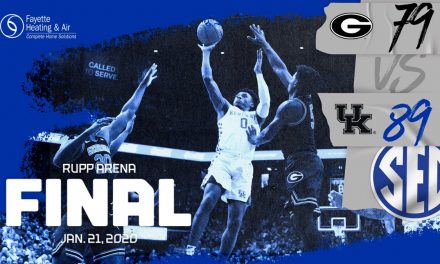 Yes, it was basket interference, but UK-LSU should have been decided before last second

Big Blue Insider @bigblueinsider1
10 hours ago
Vacation time so it's the Best Of the BBI. Tonight: @FredMaggard606, @EKUWWells & @KYHuangs talking lots of college football. And some basketball. 6pm @630WLAP https://t.co/uhXYJ39wo2
View on Twitter