Blame the COVID monster, blame the play-calling, blame the Birmingham Eye in the Sky – Kentucky’s loss at Auburn on SEC Opening Weekend was nothing like most UK fans pictured it.

Thanks to the germs that have kept most of us pinned on our own respective sidelines for months, it all started a month late at conference locations around the league. There was no easing into the season for anybody via matchups with East Directional State.

In recent years, Auburn has struggled to even attempt to keep up with its big brother in Tuscaloosa, but still the Tigers were rated a Top 10 performer in several pre-season polls and they played like it.

And yet, Kentucky trailed by only two points in the fourth quarter but that was a bitter pill for Wildcat fans to even attempt to swallow. The image of Chris Rodriguez, football in hand, leaning into the Auburn end zone will remain forever burnished into the mind of any Big Blue backer who bore witness. It was obvious to all — except whichever camera angle in the SEC replay facility cast enough doubt to deny the six points.

The decision absolutely changed the game’s momentum, as two plays later the Tigers picked off a Terry Wilson pass in the end zone and nearly turned it into a pick-six. The Leaning Tower of Rodriguez play took its place in UK football infamy, joining (among so, SO many others)

You could sit around the football campfire all night, spinning different tales of Kentucky football misery. One of them could include the loss to Mississippi in 2017, when the Rebels’ D.K. Metcalf out-jumped UK’s Lonnie Johnson for a TD pass with five seconds left, the difference in a 37-34 Ole Miss victory.

And now the Rebs are coming back to town, a week after serving notice that they’ll be a real handful for the rest of the conference this year. Sure, Lane Kiffin’s first Ole Miss team may finish at the bottom of the West, but the Rebels put up a bushel of points in their 51-35 loss to Florida, serving notice that their jailbreak offense will test practically every defense in the league.

So get ready for a potential track meet, something this Kentucky team is not exactly built to endure.

Behind QB Bo Nix, Auburn raced up and down the field as best it could, Brad White’s defensive unit doing the best it could to keep up and it was successful. The Tigers’ last two scores were a result of UK mistakes that led to short fields for the home team.

Mississippi’s offense doesn’t have quite the same triggerman in Matt Corral and there is no Metcalf hauling in passes; he’s now plying his trade in the NFL (as is Lonnie Johnson). But in Gainesville, the Rebels showed they have enough firepower to press the issue against what may be the best the SEC East had to offer.

If Kentucky wants to at least give itself a chance to surprise the football world and at least make a run at the top of its division, this is a must-win situation – already. And with Mike Leach’s aerial circus that is Mississippi State next on the agenda, Big Blue fans are learning that wins over the two teams from the Magnolia State will be anything but automatic. 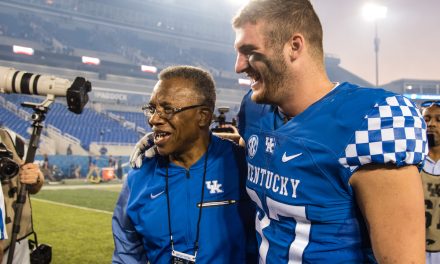 2 DAYS UNTIL KENTUCKY FOOTBALL KICKS OFF

Big Blue Insider @bigblueinsider1
2 hours ago
Vacation time so it's the Best Of the BBI. Tonight: The Garage Guys - @Darren_Headrick, @KeithMadison32 & Doug Flynn in my studio/garage. You won't want to miss it. 6pm @630WLAP https://t.co/fhkYOuZHxE
View on Twitter