When I was a kid, I wanted to be Mike Pratt.

Yes, there was the big guy in the middle, Dan Issel. But it was Mike who fascinated me.

That 1970 UK team was my first great basketball passion.  It wasn’t Rupp’s Runts, as I was so engulfed with baseball during the early ’60s that for the most part I ignored other sports.

But the 1969-70 team… THAT was the one that was going to win an NCAA title.  And of course, I hung on Cawood Ledford’s every word, especially when Issel had the ball. You knew he was going to score; it was just a matter of when and how.

But Pratt intrigued me the most. He was a 6-foot-3 “power” forward whose size may have belied the label but not the way he played the game. MIke was as tough as they came. He suffered a broken nose during one game and tried playing in a face mask the next. That lasted all of one night.

It was his shooting that amazed me. Time after time he would square up from the corner and drain a jumper. How in the world could anybody do that without benefit of a backboard? I wondered.  But he did it – so often, in fact, that even with Issel commanding the ball much of the time, Mike was named All-SEC as a junior and All-America as a senior.

It would be another 30 years before I became one of his broadcast colleagues, and now he’s gone.

We’ve known for a while that Mike was in the fight of his life, battling cancer which had spread, subsided somewhat and then returned, as it often does with frightening vengeance. I only spoke to him about it once, during this past season. He was in midst of tests, diagnoses and more tests as doctors tried to figure out what the disease was doing and what their next step would be.

I couldn’t imagine – and here it was happening to my friend.

I don’t even recall the first time I formally met Mike; I know I interviewed him on my first radio sports talk show back in the early ’80s when I worked at WVLK and he was the head coach at UNC-Charlotte. Even then, to a young kid just getting started in broadcasting, he was friendly, affable and a terrific interview. I suppose the fact that I was working at the time for his old pal Ralph Hacker didn’t hurt but I would come to find out, Mike treated everybody that way.

He became Tom Leach’s broadcast partner 20 years ago and never missed a game. Their on-air chemistry was wonderful and I can tell you, it was exactly the same off the air. Tom often said Mike was like a big brother to him. He was a brother to all of us.

Every now and then I would fill in on the basketball pre-game show which included interview segments with Mike. We would usually talk ahead of time about topics for discussion but no matter what I threw at him, Mike would handle it and always made it sound easy.  That was his gift.

Most people don’t know this but I’m one of three or four people ever to fill in for Cawood Ledford calling play-by-play on a UK basketball game.  It came in 1979 when the Wildcats were playing Duke in the inaugural Hall of Fame Tipoff Classic in Springfield, Massachusetts.

The football Cats were playing on the same Saturday down in Gainesville against the Florida Gators. Cawood and Ralph worked that game; the network chose to send me, along with former high school coach Jock Sutherland (he and I had broadcast three Blue-White games that fall) to do basketball.

I bring that up only because on Feb. 22, 2006, I actually sat in for Tom Leach on a UK broadcast for about 15 minutes.  Tom was battling a bug and had to abandon the press table to seek medical treatment.  Our producer at the time, Mike Dodson, rushed down press row and summoned me.

I came off the bench again.  And this time, I was working with Mike Pratt.

It happened to be senior walk-on guard Preston LeMaster’s best game as a Wildcat; in 19 minutes against Ole Miss he scored a career-high 12 points on 4-of-5 three pointers. As I called one of the buckets I paused, and there came that familiar voice. Mike Pratt was in my headset, analyzing the action.

Tom made it back after about three minutes on the game clock (a TV timeout came in handy) and finished up. But I had another fond memory to pack away: I had called (at least a part of) a UK basketball game with Mike Pratt, the guy I had emulated all those years ago, firing up anonymous jump shots in the back yard.

They say, Never meet your heroes. Well, I met one of mine and even though he’s gone, to me he’ll remain a hero forever. 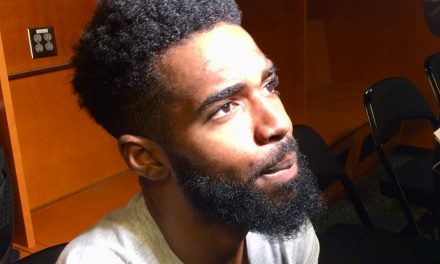