Early clues were there about Kentucky’s struggles; we looked past them

Nobody’s perfect but hindsight surely is. It is as flawless as a crisp afternoon in the fall, one presenting a spectacular array of colors,  both in trees and in sweaters emerging from the closet for their first appearance of the season.

And it’s hindsight that tells us we should have pumped the brakes on this Kentucky football team, perhaps as early as spring.

Pumped? Hell, we should have mashed down on that pedal so hard that the tires on the Big Blue Bus locked up, screeching and smoking and leaving skid marks from here to Paducah.

This is not an indictment of the current UK team, nor is it a declaration of hopelessness. It’s simply an admission that those of us who saw potential for double-digit wins breezed past some tell-tale warning signs that have since begun to glow in the dark.

An interjection here, as well: Kentucky should NOT have lost to South Carolina. The Gamecocks played sharply and were well-prepared.  But the Wildcats were better and we know this because of what happened before our eyes in Oxford.

Kentucky traveled to one of the most hostile environments the Wildcats have encountered since Mark Stoops took over, fell behind (thanks in large part to mistakes of their own admission), lost one of the best linebackers in the SEC to injury early in the contest and STILL marched all the way to the end zone for the winning touchdown, only to see it taken down because of the tiniest of errors.

And then came the victory-denying fumble in the closing seconds.

Will Levis could only watch, his injured left foot in a boot, as his teammates fell to South Carolina

That kind of emotional tumble may have had something to do with the fact that the Wildcats weren’t ready, emotionally or mentally, to face South Carolina. Losing Will Levis and Jacquez Jones, two of their vital leaders, clearly did.

But we didn’t know this six months ago, back when this team was taking shape. What we DID know was that by then, Darian Kinnard, Luke Fortner and Dare Rosenthal were gone, having taken up residence in NFL camps.

We already knew that Eli Cox was moving to center and eventually found out that guard Kenneth Horsey, so solid for the past two years, was being moved to tackle – a position that required a skill set different from the one he had developed in his two season as a starter.

Sure, any one of us with a platform for prognostication would mention the work that lay ahead of the O-line. We would even mention the fact that new offensive coordinator Rich Scangarello would employ a different blocking scheme – the same scheme that former OC Liam Coen had attempted to install but quickly abandoned last year, even though he had the services of one of the best blocking platoons in the country.

But we plowed on, trusting that the Big Blue Wall would take solid shape, providing creases for Chris Rodriguez and ample protection for Levis.

Until now, that wall has been a shape-shifter, with five different starting combinations in the first six games breaking the huddle. And results, looking back, were predictable.

This is not to lay all the problems for this team at the feet of Zach Yenser’s bunch. The new O-line coach is the guy who’s been forced to constantly juggle the pieces of a unit that was expected to work in perfect concert from Opening Day. And at times, its performance has been commendable, particularly during that second-half comeback in Oxford.

The defense, with new faces of its own along the front line, has had its struggles at times. The most noticeable came during the second half with South Carolina but it also made its share of mistakes early in the loss to Ole Miss, only to rise up, bear down and hold the Rebels to just one first down in the second half. It gave the offense a chance to win.

Kentucky’s defense ranks 12th among 14 SEC teams in sacks, with only eight. (Vanderbilt is 13th and, amazingly, Georgia 14th although the Bulldogs haven’t really needed many).  Only 13 Division I teams have fewer than the 27 tackles-for-loss UK has.  Ironically, Mississippi State is one of them but the Bulldogs are tied for fourth in sacks with 14.

And now the Wildcats find themselves at a turning point, needing a victory over one of the hottest teams in the conference, one that averages 38 points per game. Two years ago, the UK defense pitched a shutout over the Dogs, with the offense responsible for the only points MSU scored in a 24-2 loss at Kroger Field.

State’s loss that night came be squarely blamed on the six interceptions the Wildcats produced. MSU quarterback Will Rogers came on in relief for starter K.J. Costello, who threw four of them. Rogers, struggling along with the rest of the Bulldogs to grasp Mike Leach’s Air Raid attack, was responsible for the other two.

Since then, Rogers has become one of the most proficient QBs in the country, leading the nation in passing yards, second only to Ohio State’s C.J. Stroud in touchdowns with 22. He was nearly perfect against Kentucky last season, hitting on 36-of-39 passes for 344 yards and a TD in a 31-17 victory.

Simultaneously, it was Levis’ worst game as a Wildcat (17-28 with three picks and only 150 yards).

But the loss turned out to be merely a blip on the way to 10 wins, including a bowl game victory on New Year’s Day.  Those milestones are still available to the Wildcats but it will take their best 60 minutes of the season so far to make that happen.

And that’s not hindsight. That’s a dose of reality – available to us but barely acknowledged, all those months ago. 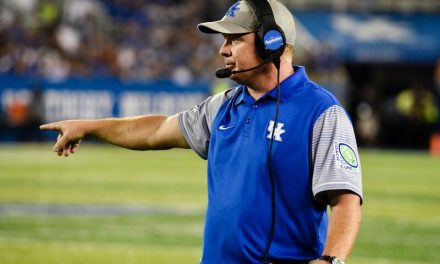 Sept. 22 podcast at the statue unveiling at Commonwealth Stadium